Stockholm Bromma, located in a wealthy residential area only 8 kilometres from downtown Stockholm, was the main airport for the Swedish capital between its construction in 1936 and its replacement by Arlanda in the early 1960s. Until 1983, the airport remained Stockholm’s main airport for domestic flights, after which it spent a decade serving corporate and general aviation before reopening for commercial traffic in 1992, accepting international flights again soon after. 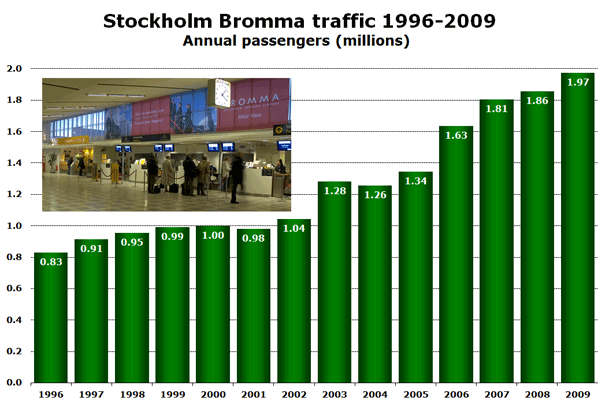 In the last decade, traffic has surged and passenger numbers almost doubled in the last 10 years. 2003 and 2006 reported particularly strong growth, with figures rising by over 20% on the previous year.

The airport’s preferable location, which in particular draws business travellers, would attract even more airlines if it were not for the considerable limitations that restrict the airport’s growth. Bromma’s runway is too short to accommodate large aircraft. Furthermore, its location close to the city means that it has come to operate under strict environmental and operational regulations. There is a cap on the number of movements, restricted opening hours etc. The permit for operating the airport was, however, renewed as recently as in 2008 and is valid for 30 years.

The largest aircraft serving Bromma is the Avro RJ100, which Malmö Aviation operates in a 112-seat configuration and Brussels Airlines with 97 seats. 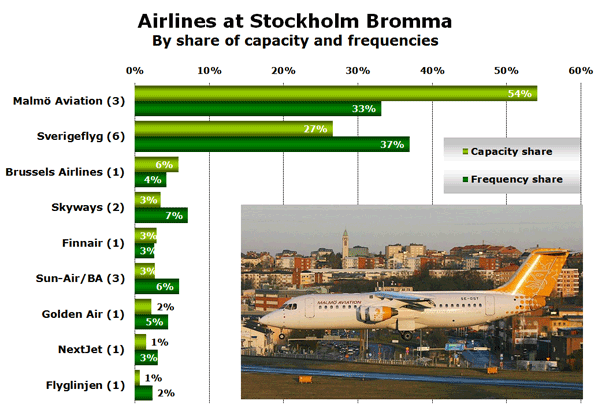 The largest airline at Bromma is Malmö Aviation, which was also the first airline to establish itself at the airport in the 1990s. It operates three domestic trunk routes to Malmö, Gothenburg and Umeå only. Other domestic operators, such as runner-up Sverigeflyg (a group of small, regional virtual airlines), serve thinner routes to Swedish regions.

Internationally, British Airways’ Danish franchisee Sun-Air of Scandinavia has served Bromma from Aarhus since 1992 and added Billund last September. Along with Finnair, which historically took part in the move from Bromma to Arlanda in 1962, it also launched high-frequency flights to Helsinki last week. Brussels Airlines has operated its Brussels route, which at 1,270 kilometres is the longest route to Bromma, since 2004.

NextJet, the regional airline part-owned by former ABBA member Björn Ulvaeus, currently offers no flights outside of Scandinavia and only serves Åre/Östersund non-stop from Bromma, but has announced its intention to launch flights between Bromma and London City Airport this autumn. No start date is yet publicised. SAS served the London airport from Stockholm Arlanda until last year and the new route will be the first time Bromma and London are connected since Malmö Aviation operated the same route in 1992-93.