In April, daily non-stop flights to London resumed. Although the route is marketed by Lufthansa, the service (to London Heathrow) is operated by an A319 from its latest acquisition bmi British Midland. According to the airport, traffic on the route is currently around 60:40 in favour of German originating passengers.

With just over 1.7 million passengers in 2009, Dresden airport (which will celebrate its 75th anniversary later this month with a two day party featuring a performance by the legendary Boney M) ranked 15th amongst German airports last year, although passenger numbers fell by 7%. In the first half of 2010, passenger numbers are up 4.6%, well above the German average of just 1.7%. This has been helped by the return of direct air services to London. British Airways gave up its daily London Gatwick service at the end of October 2008, but on 22 April this year, Lufthansa began daily flights to London Heathrow, operated by its latest acquisition bmi British Midland. 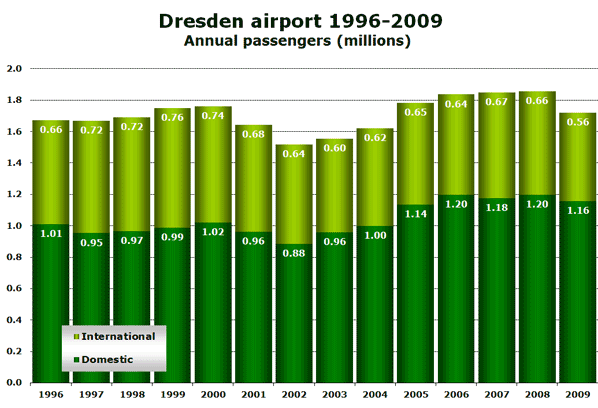 Traffic demand has oscillated between 1.5 million and 1.9 million since the mid-90s, with domestic traffic last year accounting for two-thirds of passengers, as international demand fell to its lowest level in many years.

Part of the airport’s problem is that Berlin Schönefeld (which in 2012 will evolve into Berlin’s only airport under the name Berlin Brandenburg International) is just 140 kilometres to the north. However, Dresden’s airport is just 15 minutes, a few stops and €1.90 from the main stations in downtown Dresden. 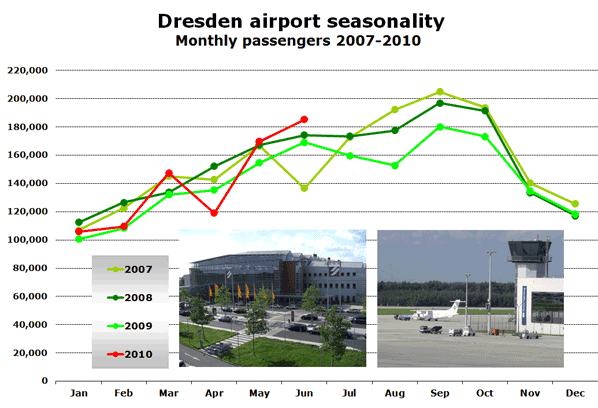 The unseasonal dip in demand in June 2007 was the result of runway maintenance work which closed the airport for four weekends that month.

In 2009, the leading domestic routes in terms of passenger volumes (Source: Destatis) were Frankfurt (326k), Düsseldorf (252k), Munich (208k), Cologne/Bonn (184k) and Stuttgart (120k). Lufthansa serves the three busiest routes with competition from airberlin on the Düsseldorf route. Lufthansa’s own LCC, germanwings, serves Cologne/Bonn (since March 2003) and Stuttgart (since October 2004). It also briefly served Hamburg in 2005-06 but this route is now served solely by Cirrus Airlines.

Last year, around 560,000 passengers flew on international services from Dresden. Almost 40% of these were flying to just two destinations; Palma de Mallorca in Spain and Antalya in Turkey. Both of these routes generated over 100,000 annual passengers, but no other international destination achieved more than 30,000. If the London route is a success, then it will immediately leap to third place among international destinations. Another new route started earlier this year, by Air Dolomiti to Milan Malpensa, has been less successful and ceased operating on 29 August.

A significant event for the airport will be the start of easyJet flights at the beginning of December to Basel. Although operated initially just three times per week, if the route is a success, other services to established easyJet bases across Europe may follow. It should be noted that Dresden has no direct services to Amsterdam, Barcelona, Madrid, Paris or Rome.