Kingfisher’s international expansion has taken it to sixth place in the Indian international market. In April alone, Hong Kong, Bangkok and Kathmandu were among the airline’s new destinations.

Following growth of 20% in the first quarter of 2010, India’s airlines have done even better in the second quarter reporting traffic growth of almost 24%. After the traffic slump that lasted 12 months from June 2008 to May 2009, passenger numbers in 2010 are now between 15% and 25% above the levels reported in 2007. 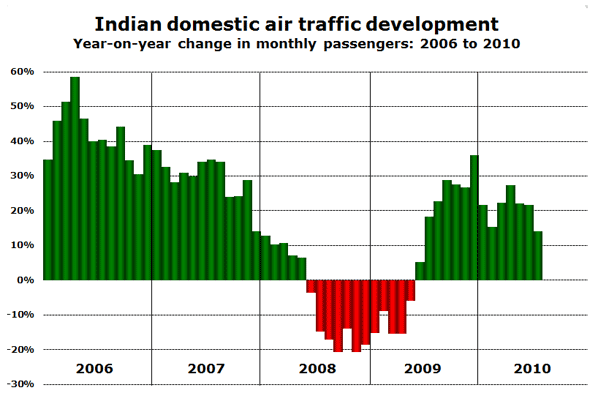 The combined might of Jet Airways and its subsidiary Jet Lite continues to have the largest share of the Indian domestic market based on passenger numbers. In the second quarter of 2010, the Jet Airways Group has averaged around 26-27% of the market compared with Kingfisher at around 20-21%. These two carriers (which have absorbed the likes of Air Sahara and Air Deccan in recent years) carry almost one in every two passengers around India. 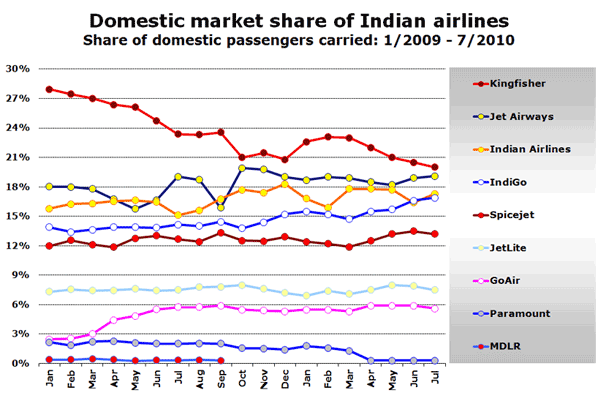 So far in 2010, the biggest changes have been the gradual decline in Kingfisher’s domestic market share and the steady growth of IndiGo’s share to a new high of 16.9% in July. Since April, Paramount’s market share has fallen from around 1.5% to just 0.3%.

Unlike the domestic market, international traffic suffered a much shorter (and smaller) slump in demand. In May, the reported growth rate of just over 16% was the highest it has been since November 2007. 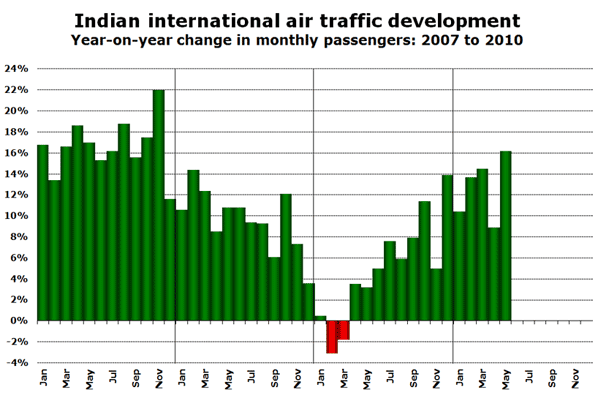 Since our analysis in May, Emirates has closed the gap on Jet Airways as the largest single provider of international capacity, while Kingfisher has increased international capacity by a massive 30%, taking it past Air Arabia into sixth place. Qatar Airways, which only increased capacity to India by 1% between April and August ,has just announced plans to increase the number of weekly flights to the country from 74 to 88 by the beginning of November. The airline currently operates daily flights from Doha to Ahmedabad, Bengaluru, Chennai, Cochin, Delhi, Goa, Hyderabad, Kozhikode, Mumbai and Trivandrum, plus four weekly flights to Amritsar. From 1 September, Amritsar flights will become daily and from the beginning of November, Cochin will be served 11 times weekly and Delhi will become double-daily.

Qatar Airways’ CEO Akbar Al Baker said: “We are pleased to announce additional frequencies to Delhi, Cochin, and Amritsar from September, which further cements our commitment to the Indian market. Since last year and taking into account the new upcoming frequencies, we will have stepped up capacity to India from 56 to 88 services a week, which represents a remarkable 57% increase in frequency to and from India. India is a very important market for us, as we are able to offer a large selection of destinations and very convenient connection times to numerous global cities that Qatar Airways serves from Doha.”