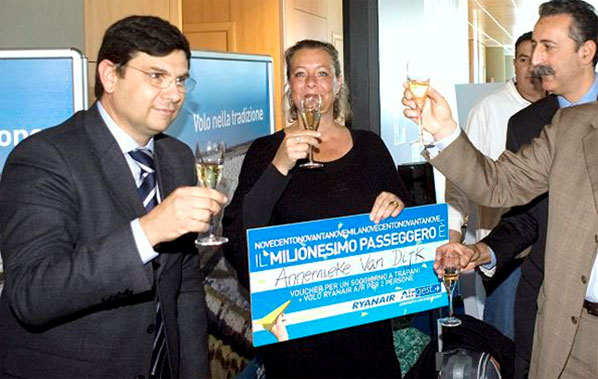 Trapani is the Italian airport that is experiencing the greatest growth; +65% so far this year. This resulted in the airport reaching a million passengers much earlier this year than last, when the event only took place in December.

After two successive years of falling passenger numbers (down 1.8% in 2008, and down 2.3% in 2009), Italy’s airports are finally recovering in 2010. Despite the volcanic ash saga in April, demand for air travel at Italy’s airports is up 5.3% in the first seven months of 2010, with international traffic (+5.9%) marginally outperforming domestic traffic (+4.7%). Among the biggest airports, year-to-date growth has been highest at Bologna (+14.7%), Bergamo (+7.5%), Turin (+6.8%) and Milan Malpensa (+6.7%). After seven successive months of being the fastest growing major Italian airport, Bologna lost this claim to Turin in April, May and June, but has reclaimed the title in July. 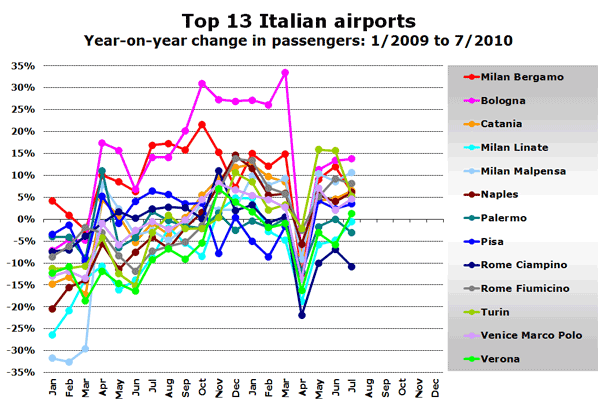 Ryanair’s Bologna base set to reach 35 destinations this winter

The growth of Bologna can be attributed to the growing Ryanair presence at the airport. It became a Ryanair base in October 2008 with the launch of six routes, which was increased to 21 during the summer 2009 season. Winter 2009 saw the addition of Bratislava and Seville to the network, while this summer has seen further new routes to Bordeaux, Malaga, Malta and Wroclaw. Only Birmingham has been axed along the way, leaving Ryanair serving 26 destinations from the airport this summer. This winter will see the addition of a further nine new routes to Fez, Krakow, Lanzarote, London Gatwick, Marrakech, Palermo, Porto, Tenerife Sur and Zaragoza. 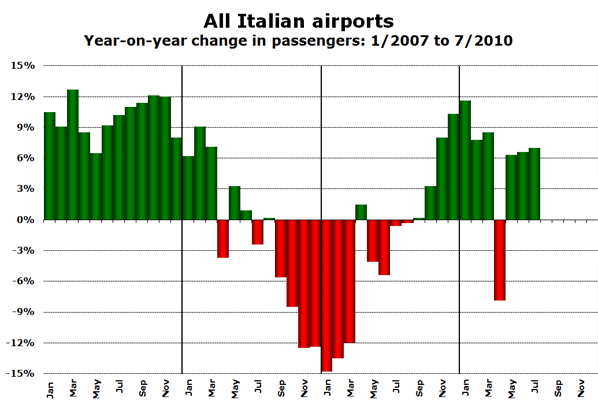