Ryanair starts Barcelona base to take on Vueling; Iberia dominant only in Madrid; airberlin still rules in Palma Today, Ryanair launched its new base at Barcelona El Prat Airport. The airline’s CEO Michael O’Leary made it clear that he counts the airline at #1 in the Spanish market. Indeed, the low-cost giant’s market presence now spreads across 10 of the country’s top 12 airports.

This week saw a significant milestone in the Spanish aviation market. Ryanair, already the country’s second largest carrier by passengers flown, began operations at Barcelona El Prat airport by launching 20 new routes from the airport. Having already established a significant base at Girona airport (to the north of Barcelona) and a smaller base at Reus (to the south of Barcelona), Ryanair has now entered Spain’s second busiest airport.

Spain is unusual in Europe in that at each of the country’s four busiest airports, a different airline dominates. Iberia still controls Madrid, Vueling is top in Barcelona, airberlin rules the roost in Palma, while Ryanair is number one in Malaga. Curiously, a similar situation exists in the UK where British Airways (London Heathrow), easyJet (London Gatwick), Ryanair (London Stansted) and Thomson Airways (Manchester) are each the busiest carrier at one of the four leading airports. Maybe this helps explain the willingness of British Airways and Iberia to merge. 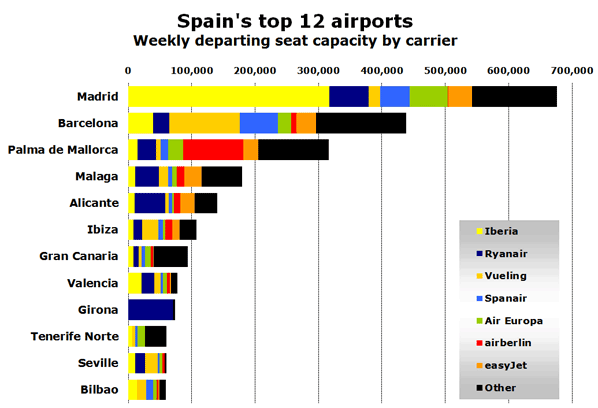 Iberia is the leading carrier only in Madrid, where it is coming under increasing pressure on short-haul routes from other carriers. Ryanair (not normally noted for serving major airports) now has almost as many flights from Madrid as it does from its long-standing Girona base. Iberia ceded much of its former network at Barcelona to its low-cost affiliate clickair, before it merged with independent Vueling to become the dominant carrier at the airport. airberlin looks likely to remain the dominant carrier at Palma de Mallorca for the foreseeable future. airberlin, Air Europa, Iberia, Spanair and Vueling all have a presence at 11 of the top 12 airports (Girona being the exception for all five airlines).

Spanish airport traffic up 1.5% in January to July period

According to the latest traffic statistics from AENA, passenger numbers across all airports are up 1.5% for the first seven months of 2010, even despite the blip caused by the volcano ash cloud saga in April. In July, passenger numbers were up 3.6%, with Fuerteventura, Ibiza and Malaga all reporting double-digit growth.