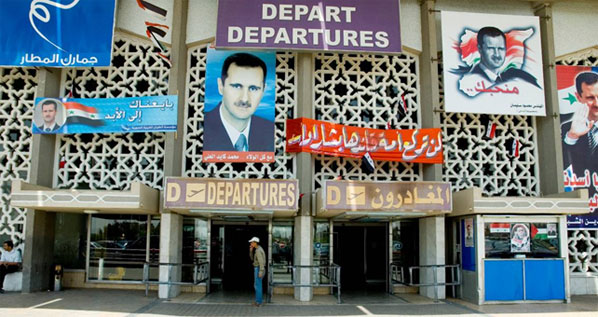 Damascus Airport’s extensive marketing experience appears to have been useful in attracting new airlines to the Syrian capital. Six new routes have launched since last year and LOT Polish is scheduled to add Warsaw services in November. 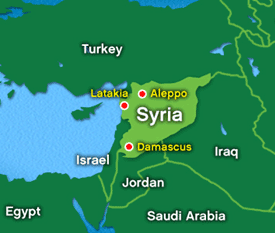 Syria’s capital Damascus claims to be the oldest constantly inhabited city in the world. The country (which shares borders with Iraq, Israel, Jordan, Lebanon and Turkey) has a population of around 22 million people and has five airports with scheduled services (according to OAG) of which the largest by far is Damascus Airport. The airport currently sees around 400 weekly departures to over 50 international destinations and last year handled a reported 4.5 million passengers, almost double the figure from 2004.

Aleppo is the second busiest airport with Latakia a distant third. Across all Syrian airports, the biggest country markets are the United Arab Emirates and Saudi Arabia, followed by Kuwait, Turkey and Iran. Dubai and Sharjah are both served non-stop from all three of the leading Syrian airports, while Abu Dhabi is served from Damascus. 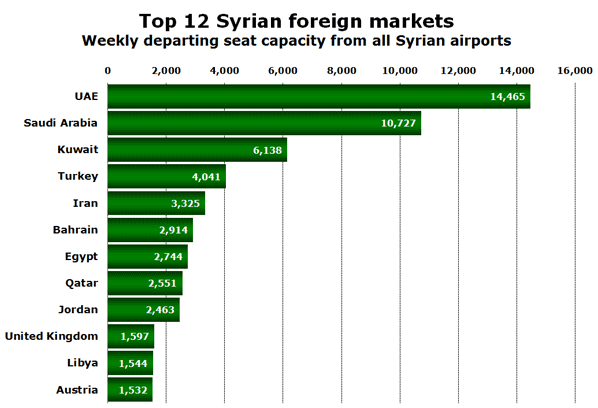 Among the top 12 countries, two are in Europe. The UK ranks 10th thanks to bmi’s daily flights from Heathrow, which are complemented by twice weekly services from Syrian Arab Airlines, while Austria is 12th thanks to Austrian and Syrian both operating to Vienna.

Syrian Arab Airlines (also branded as Syrianair) is the government-owned national airline and operates a mixed fleet, including seven A320s and two ATR 72s. With an international network of just 40 routes (28 from Dammam, 11 from Aleppo and just one from Latakia) the carrier’s share of international seat capacity is just 16%, although it is still twice as big as any other carrier in Syria. 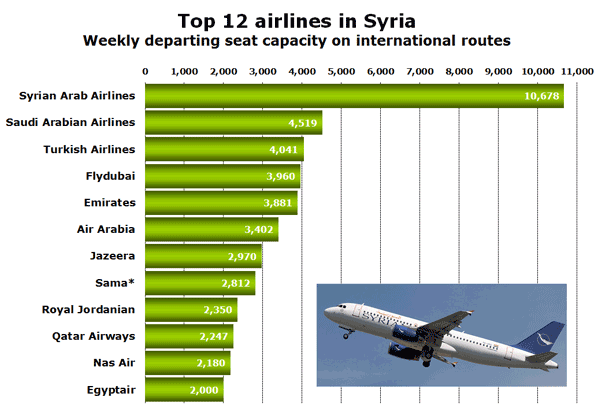 A total of 43 airlines were operating international scheduled flights to 35 countries from Syria at the beginning of August, though the recent demise of Sama (which ranked eighth) has reduced this by one. European carriers operating to Syria include several flag carriers (Aeroflot, Air France, Air Malta, Alitalia, Austrian, Czech Airlines, Cyprus Airways, Iberia, Malev and Tarom) but not British Airways, KLM, Lufthansa or SAS. No US or Asian carriers currently operate to Syria. Polish flag carrier LOT is scheduled to start flights from Warsaw at the beginning of November. 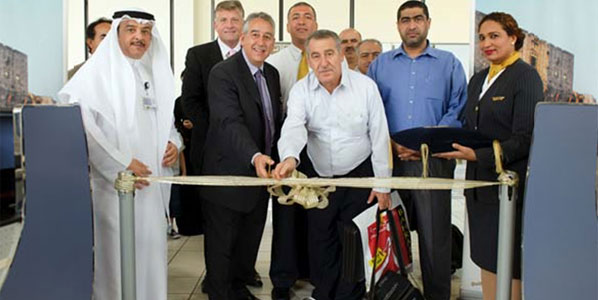 When Gulf Air launched three weekly flights between Bahrain and Aleppo in June, it became the airline’s second Syrian destination. The airline has already been operating flights to Damascus for more than two decades, since 1987.

Since the beginning of 2009, new services to Damascus have been started by Wataniya Airways (from Kuwait), Flydubai (from Dubai), AnadoluJet (first from Ankara, then moved to Antalya), Air Malta (from Malta), Tarom (from Bucharest), and Iberia (from Madrid). New Aleppo routes started in the last 18 months include Flydubai (from Dubai), Gulf Air (from Bahrain) and Nas Air (from both Jeddah and Riyadh).

With a wet-leased fleet comprising an A321, an A320 and an MD83, Cham Wings Airlines offers flights from Damascus to Antalya, Baghdad, Brussels, Dammam, Gothenburg, Istanbul, Malmö, Najaf and Sharm El-Sheikh (at least according to the airline’s website). According to OAG, the only routes operated as scheduled flights are currently Baghdad, Brussels and Najaf.