WestJet resumes growth as international network grows; Calgary being caught by Toronto as biggest base 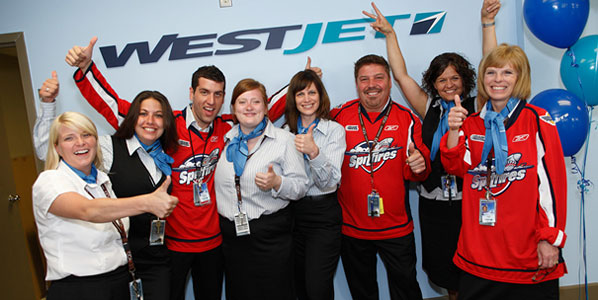 Although WestJet’s international route network is expanding, domestic services remain the core of the airline’s operations and make up 85% of capacity in summer. A recent contributor is the daily summer route between Calgary, AB and Windsor, ON, which launched at the end of May.

Calgary-based WestJet has come a long way since it began operations on 29 February 1996 (yes, that means that it technically only can celebrate its birthday once every four years). In 14 and a half years, the carrier has grown rapidly (except last year) and has carried over 100 million passengers, or ‘guests’ as it prefers to call them in its press releases and marketing material. The airline’s fleet of 737s has now grown to 90 of which 65 are -700s (with 136 seats) and 12 are -800s (with 166 seats). A further 45 Next Generation Boeing aircraft will be delivered through 2017, although some of these will replace existing aircraft. 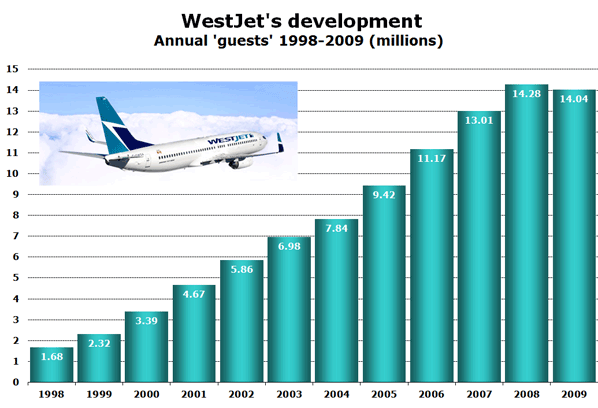 One of the trends of the airline has been the year-on-year increase in average sector length. This has increased from 383 miles in 1999 to 758 miles in 2004, and 923 miles in 2009 as the airline has increased the amount of medium-haul flying it does. According to WestJet’s own half-yearly report, during the winter season (from November to April), between 40% and 50% of monthly ASMs are allocated to transborder (US) and other international flights (including charter services). During the summer months, these routes account for only around 15% of capacity.

Having initially operated solely on Canada’s west coast (hence the name), the airline expanded eastwards when Canadian Airlines was absorbed by Air Canada. While Calgary remains the airline’s busiest airport with over 550 weekly departures, Toronto has been gaining fast in recent years and now offers almost 500 weekly departures with WestJet. At some point in the not too distant future, Toronto (Canada’s busiest airport) is likely to become the airline’s biggest base. 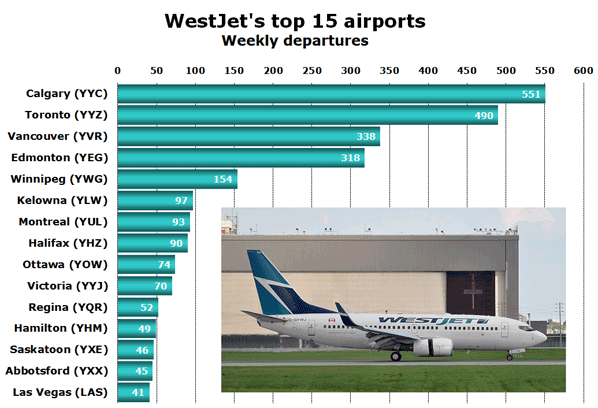 During the peak summer period, the airline’s busiest non-Canadian airport is Las Vegas, which it serves from its five biggest bases and Montreal. Los Angeles, San Francisco and Fort Lauderdale are the next biggest non-Canadian airports during the summer. As further evidence of its international aspirations, the airline has recently announced new seasonal non-stop services to New Orleans, Grand Cayman and Santa Clara, Cuba, and seasonal non-stop flights from several Canadian cities to Montego Bay, Jamaica. In total, WestJet currently offers flights to 71 destinations. 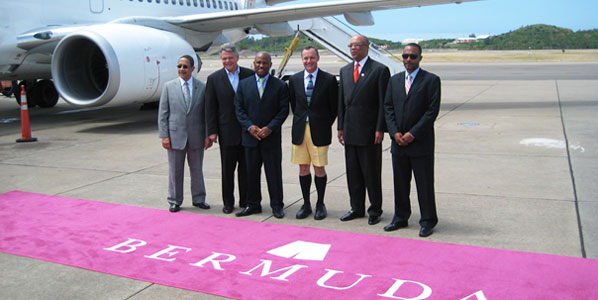 Canadians seem to have an insatiable thirst for exotic sunshine destinations, as WestJet keeps expanding its international network. At the beginning of May, it launched daily flights between Toronto and Bermuda (John MacLeod, WestJet’s VP Network and Revenue, dressed up for the occasion), and recent announcements include flights to New Orleans and several Caribbean destinations.

WestJet operates 13 routes with more than four daily flights. These are all domestic routes, 12 of which involve either Calgary or Toronto. Air Canada provides head-to-head competition on 12 of the 13 routes and on 10 of these routes it offers more weekly flights (although not necessarily more weekly seats). 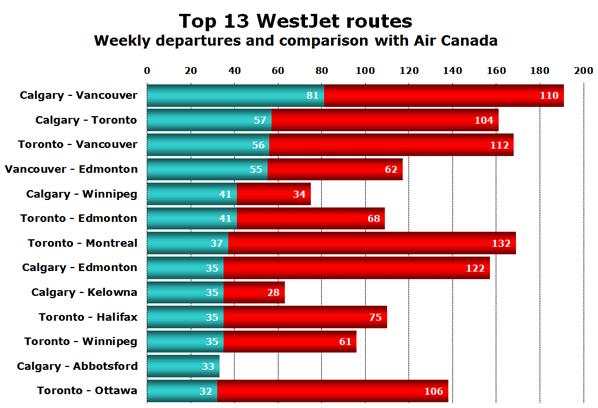