The first of three announced routes to Gothenburg’s main airport Landvetter, easyJet began flying daily from London Gatwick on 6 September. The last time the two airports were connected was in 2003 when City Airline dropped the route, having picked it up after British Airways that pulled out of the Gothenburg market after 9/11, but now is due to return with Heathrow services in late November.

anna.aero had the pleasure of attending the fantastic launch celebrations at both ends of the new route and has great photos to share.

‘ABBA’ performed at London Gatwick; want passengers to Take a Chance on Gothenburg Paul Simmons, easyJet’s UK regional GM, said: “Abalicious performed a fantastic set in the departure lounge and by the end was packed full of dancing queens.” Gatwick’s location close to Brighton, where the Swedish band ABBA won the 1974 Eurovision Song Contest, made the song ‘Waterloo’ particularly popular among Gatwick passengers and crew who gladly sang and danced along. Mikael Bohman, easyJet’s PR representative for Sweden, pointed out to the gathered passengers in the gate area that Gothenburg will surpass Stockholm Arlanda and become easyJet’s biggest Swedish airport once Berlin and Manchester services are launched later this autumn. He welcomed passengers to enjoy low-cost services to and from “real airports”. Andreas sets his priorities: In spite of the fact that boarding was underway, our assistant editor preferred a delicious piece of cake with Johan Zimmergren, the airport’s route development manager (left), more than the grab for an early seat back on the return flight to London Gatwick. The crew, who were too busy turning around the aircraft to join the celebrations, were given a large piece of the cake to bring with them.

British Airways next to serve Gothenburg; reverts to Ryanair-esque marketing 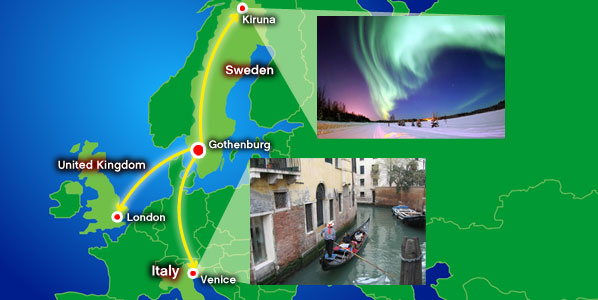 In its press release for its own London-Gothenburg services starting in November, British Airways says the city has “the best views of the famous Northern lights.” In fact, the place where you are likely to encounter the phenomenon is 1,200 kilometres to the north – about the same distance as Venice.

When British Airways launches its Gothenburg services from London Heathrow, it can be expected that a healthy share of its passengers will be connecting at Heathrow to travel from and to other BA and oneworld destinations and the airline is now marketing Gothenburg to foreign visitors. In a press release, British Airways makes the claim that the city has “the best views of the famous Northern lights.” This may, however, cause upset to Kiruna Airport, 1,200 kilometres to the north, as this is a Swedish airport serving an area where you may actually be able to view the “Aurora Borealis”. On the same Ryanair-esque basis, BA may wish to market its new Gothenburg destination as offering the best views of Venetian gondolas.