Great new international services to Canadian airports this year included launches by Virgin America from San Francisco and LA to Toronto, and by Iceland Express to Winnipeg (all in June). Meanwhile, Canada’s own WestJet and Air Canada continued dramatic international charges: All but two of WestJet’s 15 new 2010 routes are international, as are 16 of Air Canada’s 20 new routes.

Canada will soon be welcoming airline network planners and airport marketing executives from across the world for the Routes annual global get-together in Vancouver, but how easy is it to get to Canada with non-stop flights? This week, anna.aero takes a closer look at the leading airlines, airports and country markets for international flights to and from Canada.

A total of just 22 airports in Canada have scheduled services to a foreign country, with 19 of them having at least a daily flight over national boundaries. Surprise, surprise, Toronto Pearson is by far the busiest airport for international flights with over 2,000 weekly departures, more than twice as many as its nearest rival Montreal. Although Montreal beats Vancouver in terms of weekly international departures, Vancouver actually offers more international seats due to the larger aircraft used on many of its trans-Pacific routes. 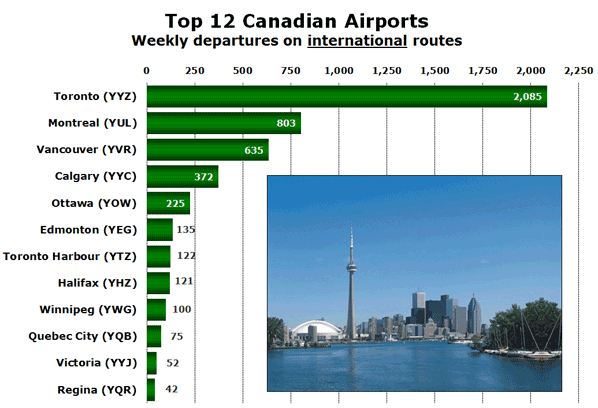 Toronto Harbour airport is an impressive seventh given that home carrier Porter Airlines only began international flights to Newark in March 2008, since when it has added Chicago Midway (November 2008) and Boston (September 2009).

Not surprisingly, the US accounts for the majority of international flights. In fact, four out of every five international services leaving Canada are heading for the US. However, since many of these are relatively short flights using smaller aircraft, these only account for around 55% of all international seat capacity from Canada. In terms of seat capacity, the next five biggest country markets after the US are the United Kingdom, France, Germany, Hong Kong and China. If measured by flights, the ranking is United Kingdom, Germany, France, Mexico and China. A summary of the destinations served at least daily (other than in the US) is shown below.

Given their positions on opposite sides of the country, it is logical that Toronto and Montreal are best for flights to and from Europe, while Vancouver’s international strength is its network of Asian routes. However, Toronto also has in impressive array of Asian destinations served at least daily.

Among airlines, Air Canada naturally leads the way, offering over 160 international routes of which just over half are to the US. When measured by flights, US carriers then fill six of the next seven places with only WestJet (ranked sixth) intervening. In winter, WestJet’s position will likely be higher as it operates many seasonal ‘winter sun’ routes. Air Transat (ranked ninth) offers over four times as much international seat capacity as tenth-ranked Porter, reflecting the different business models (and average aircraft size) of the two airlines. 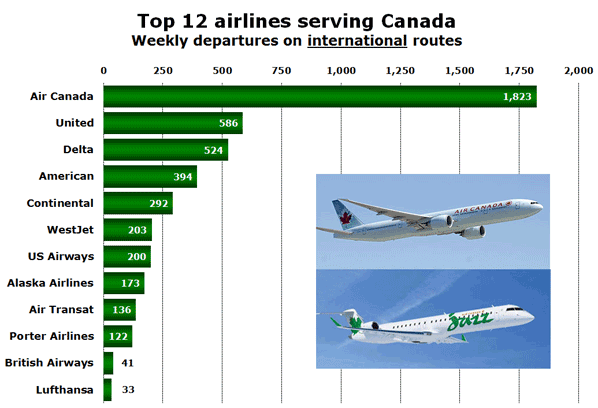 A total of 60 airlines operate international scheduled services to Canada. Of the ‘MEB3’ carriers, Emirates operates three weekly flights from Dubai to Toronto, while Etihad also serves Toronto three times weekly from Abu Dhabi. Doha-based Qatar Airways does not yet serve any destination in Canada.

In the first six months of 2010, Toronto’s international passenger numbers have risen by 8.6% (domestic has fallen by 0.2%). During the first seven months of this year, domestic traffic at Montreal Trudeau airport is up a modest 3.0%, but US traffic is up 9.5% and other international traffic has risen 4.1%. Finally, in Vancouver the first half of 2010 has seen domestic traffic grow by 2.7%, but international traffic is up 4.6%. US routes have seen demand surge by 6%, while Asia-Pacific demand is up almost 8%.