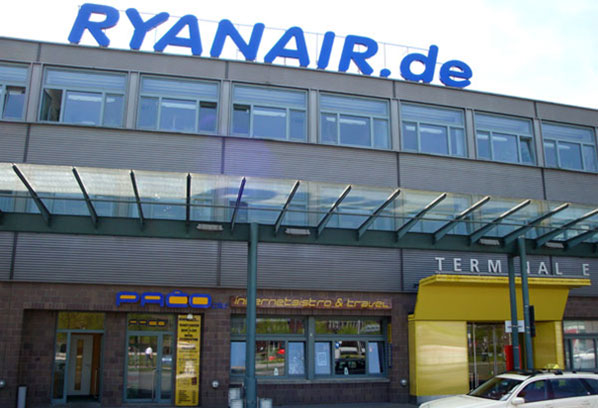 Ryanair is nowadays also a domestic operator in Germany. From its Bremen base, it launched 12 weekly services to Berlin Schönefeld in May. As there are no competing air services between the two cities, competition rather comes from three-hour train journeys. The decentralised country does, however, offer a number of important routes with intense competition in the air.

Unlike France and the UK, where air travel (and many other aspects of society) is focused around a single dominant city (Paris and London respectively), Germany has no such single focus. The capital may be in Berlin, but the country’s financial centre is Frankfurt and the country’s industrial heartland is the Ruhr which stretches from Düsseldorf to Dortmund. Then there is Munich, which has hosted the Olympics and is home to BMW, and Hamburg, which is the only German city with two football teams in the country’s top division.

As a result, the country’s top domestic air routes are not dominated by a single, common city. Last year, there were seven routes that generated over one million passengers, but none of these have ever managed more than 1.8 million, and the top four routes are separated by less than 150,000 passengers. 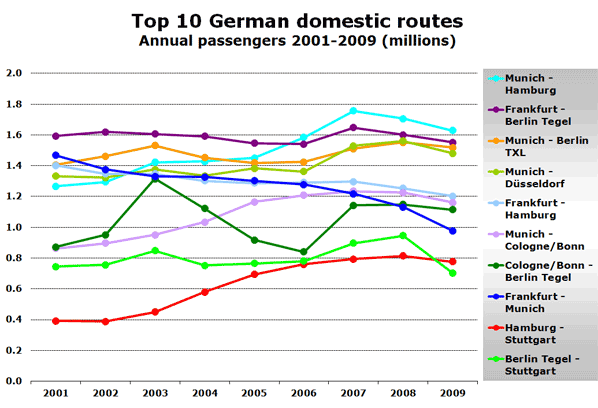 Since 2006, the Munich to Hamburg route has overtaken Frankfurt to Berlin Tegel as the leading domestic route. The Frankfurt – Munich route (which links Lufthansa’s two major hubs) has fallen in the rankings from second in 2001 to eighth in 2009. The two airports are just 300 kilometres apart and so have been vulnerable to increased competition from high-speed rail services. It is also the only top 10 route on which airberlin is not present.

The biggest growth has come on the Hamburg – Stuttgart route where annual traffic has doubled from 400,000 passengers to 800,000 as a result of being the only one of the top 10 routes to be served by Germanwings, Lufthansa’s wholly-owned low-cost subsidiary.

New “ecology” tax will add €8 to each domestic sector

As part of its ‘cost-cutting’ measures, the German government has decided to introduce a new tax on all passengers departing from German airports starting on 1 January 2011. It hopes to raise €1 billion per annum to help reduce the budget deficit. Last week, it was confirmed that this tax would cost domestic passengers €8 on each sector, or €16 per roundtrip. The government seems confident that airlines will simply pass this charge on to passengers but has failed to consider what impact this may have on passenger demand and thus jobs in the aviation, and other, industries. However, Lufthansa has indicated that it intends to continue offering its headline-grabbing €99 return fares, even in the domestic market, though presumably it will aim to sell rather fewer seats at this price than before.

So far in 2010 (January to July), domestic traffic at Germany’s airports is down 0.1% while traffic overall across all routes and airports is up 2.7%. Last year, domestic passenger numbers at German airports fell by 4.6% to 46.75 million. This represents almost exactly one-quarter of all airport passengers in Germany.