As recently as March this year, Blue Air’s CEO Sherif Ussama opened the Larnaca base that is due to close already next week. In October, the airline drops a further 10 routes.

The Romanian low-cost carrier Blue Air is currently undergoing major changes to its network. The airline, which currently ranks #2 in the Romanian market after TAROM, will by this November slip down to third place after Wizz Air. The reason is not that the airline is shifting capacity to other markets outside Romania, but the airline will overall offer an entire 30% less seat capacity than last November. In the meantime, Wizz Air’s growth in the Romanian market means that it will offer more than twice as much capacity as Blue Air.

This reduction is the result of several routes being dropped. At the end of the summer season in late October, Blue Air drops 10 of its routes. From its main base at Bucharest Baneasa, services will be lost to Lisbon, Vienna, Cuneo and Thessaloniki. From the Greek airport, the onward flights to Paphos in Cyprus are also dropped.

Regional airports in Romania are affected as well. From Bacau, Blue Air’s flights to Paris Beauvais and Bologna are dropped and the airline’s subsidiary Direct Aero Services, which operates domestic services on its behalf, is dropping services between Bucharest Baneasa and Arad, Cluj-Napoca and Timisoara, leaving the airline without a domestic route network.

Blue Air’s downsizing does not stop with the Romanian market. The airline’s single-aircraft base at Larnaca in Cyprus, which only launched at the end of March, will not even last a full season. On 15 September, even before the cutbacks in Romania, the base will close, resulting in three dropped routes to Milan Bergamo, Vienna and Warsaw. The only route remaining to Larnaca is from the airline’s Bucharest base. 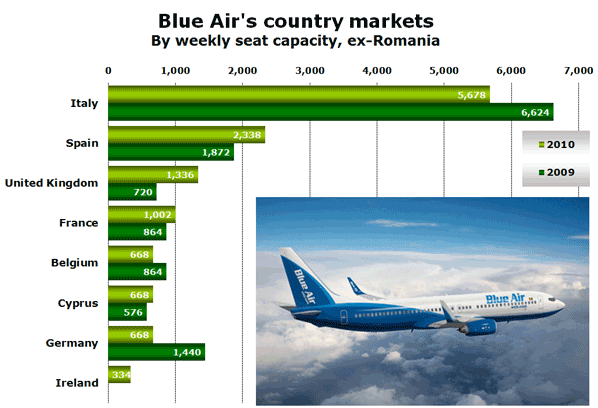 The cutbacks leave Blue Air with an entirely Romania-originating international network. Since last year, the airline has reinforced its UK operations, which are up by 86% in terms of seat capacity. The airline serves London Luton from all three of its Romanian airports; Bucharest Baneasa, Sibiu and Bacau. The Irish market is new for the year, after services between Bucharest and Dublin were launched on 29 March. Conversely, the German market has lost the most of Blue Air’s capacity and will this year be smaller than half of the size it was in November last year.

Country markets lost entirely since last year are the domestic market, which last year shared the first place with Italy as Blue Air’s largest market, as well as the smaller markets to Austria, Greece and Portugal.

The question remains what Blue Air intends to do next. No new routes have yet been announced to compensate for the reduction in capacity. On its online route map, however, the airline has added Israel, although no routes there currently are for sale. The booking tool also features unserved destinations Antalya, Heraklion, Skiathos, Chania, Lyon, Paris CDG, Bodrum, Brussels Charleroi, Pescara, Sharm El-Sheikh and Marseille, yet none of these destinations are bookable.