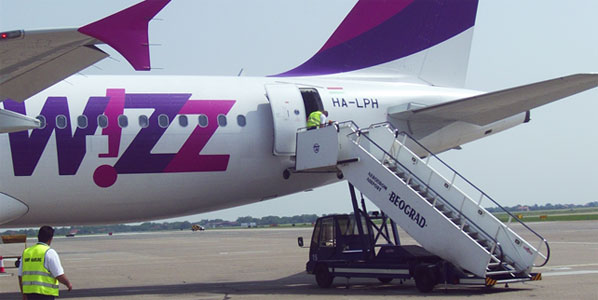 Belgrade gets to be a low cost base with a single Wizz A320 next April. anna.aero schedule analysis shows that the seven announced routes alone are not sufficient to sustain a single aircraft on its own, so the aircraft will operate an additional route from Dortmund, although it will always be back in Belgrade for 23:00 in time to depart for its first morning flight from 05:30.

Wizz Air first began operating to Belgrade earlier this year when it started flying from London Luton in May, followed in June by flights from Dortmund. Now it has announced five additional routes and the decision to base a single A320 at the airport from next April. The new routes are Malmö and Rome (in December), followed by Eindhoven, Memmingen and Stockholm Skavsta next April. anna.aero’s analysis of the current schedule shows that these seven routes alone are not sufficient to sustain even a single aircraft on its own. Apart from a return trip to Dortmund on three days of the week, the aircraft will operate an additional route from Dortmund before returning to Belgrade. Although the morning flights from Belgrade depart at between 05:30 and 06:00, the aircraft is always back in Belgrade by 23:00.

Last year, Belgrade airport handled just under 2.4 million passengers, down 10% on the 2008 peak of 2.65 million. The leading carrier at the airport this summer is JAT Airways, which operates non-stop to 30 destinations and accounts for around 45% of Belgrade’s scheduled seat capacity.

Spicejet goes international with Chennai to Colombo service from October Having celebrated its fifth birthday back in May, India’s SpiceJet is now allowed to start international services. Having given the matter due consideration, it has decided that Chennai to Colombo (Sri Lanka) will be its first foray into foreign markets starting on 9 October. However, the carrier will face considerable competition as the route is already served on a daily basis by Air India Express, Indian Airlines, Jet Airways, JetLite and Kingfisher, as well as SriLankan Airlines who operate two daily flights on the route. SpiceJet currently operates to seven domestic destinations from Chennai. 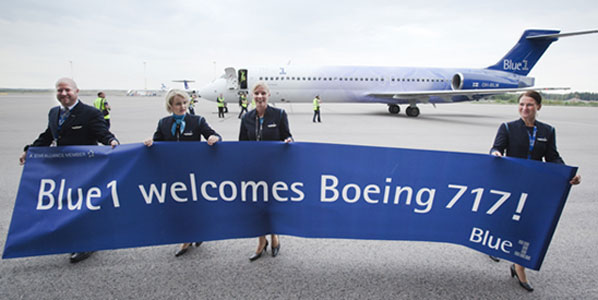 Oh look, a blue one. New services from Helsinki to Munich and Amsterdam are forthcoming. Photo: Miika Kainu/LT/Blue1.

SAS-owned Helsinki-based Blue1 has announced several new routes recently, as it also took delivery of its second Boeing 717 in the airline’s new livery. Last Sunday saw the airline’s first service operated by the new 717, to Copenhagen. From next week, Blue1 will start service from Helsinki to Munich, followed by Amsterdam starting next February. At the end of April, Edinburgh will be added to the network, followed in May by Marseille and Pula. These last three routes will operate, at least initially, as summer only routes. At present, Blue1 is the second largest airline at Helsinki Vantaa airport with just over 12% of scheduled seat capacity (derived from 19 routes), well behind Finnair, which has 60% of scheduled seat capacity. 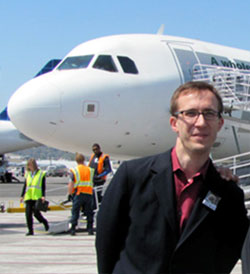 Daniel Shurz, Frontier’s VP planning and strategy: “With seven non-stop destinations and convenient connections through Denver and Milwaukee, the Omaha community now has more choices and greater flexibility in their travel.”

Omaha’s Eppley Airfield will welcome several new services operated by Frontier starting in early 2011. San Diego and Los Angeles will be completely new routes for the airline while seasonal services to Orlando and St Petersburg/Clearwater will resume. All four routes will be operated by Embraer E190s which the carrier now operates as a result of its takeover by Republic Airways Holdings. “With the addition of this service, our guests in Omaha and beyond can now enjoy Frontier’s great service and affordable fares to even more top travel destinations,” said Daniel Shurz, vice president of planning and strategy. “With seven non-stop destinations and convenient connections through Denver and Milwaukee, the Omaha community now has more choices and greater flexibility in their travel.” Nebraska’s busiest airport handled over 4.2 million passengers in 2009 (down 3.5% on 2008) with Southwest the leading carrier with 1.2 million passengers. Delta and United both handled more than 800,000 passengers through the airport while Frontier and Midwest (now merged with Frontier) carried just under half a million people between them.