The latest easyJet route to be launched from Paris: The low-cost airline now flies daily between Paris CDG and Brest in Brittany, competing with Air France’s nine daily flights (three from CDG and six from Orly). (Photos © Franck Betermin)

Last week saw the arrival of easyJet’s 10th Airbus to be based at Paris CDG airport. To celebrate, the airline started a new domestic route to Brest, as well as a new service to Copenhagen, the carrier’s eighth to the Danish capital. This summer has seen the airline start a range of new routes from the larger of the two main Paris airports. 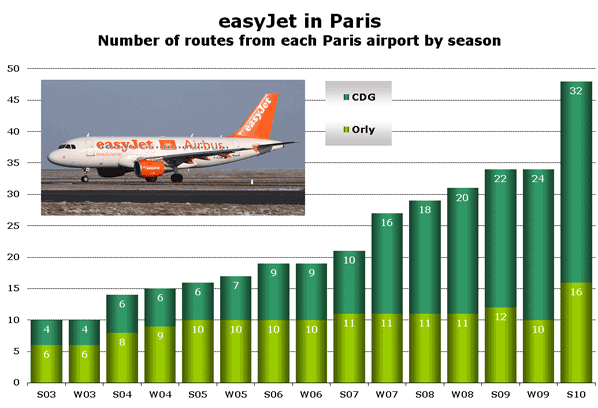 Since the beginning of the year, easyJet has launched new services from Paris CDG to Ajaccio, Catania, Helsinki, Malaga, Palma de Mallorca, Prague, Split and Toulouse, as well as last week’s two new routes to Brest and Copenhagen. This winter will see the introduction of three further new routes to Fez (Morocco), Ljubljana (Slovenia) and Zagreb (Croatia), bringing the total number of destinations served across the year to 35.

During the summer, easyJet has also added several new routes from its Paris Orly base. New destinations this year for the airline are Mykonos (Greece), Olbia, Palermo and Venice. This increases the number of destinations served from Orly to 16. As a result, the airline currently has over 50 routes on sale from Paris.

Toulouse and Venice have joined Nice as the only destinations served by easyJet from both Paris airports. Impressively, only five destinations (Basel, Dortmund, Hamburg, Marseilles and Turin) have been dropped by the airline from Paris, while Barcelona and Madrid services have been switched from Orly to CDG.