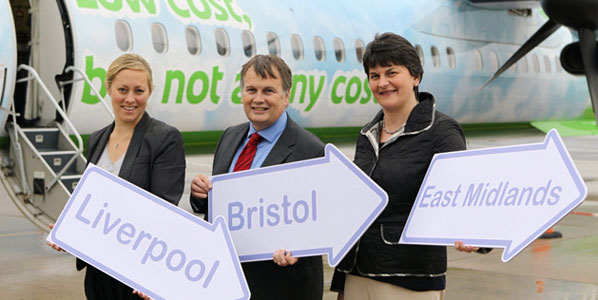 Following the recent decision that Ryanair would pull out of its base at Belfast City, and so ending services to Bristol, East Midlands, Glasgow Prestwick, Liverpool and London Stansted, Flybe has announced plans to start new routes from the airport to three of these destinations. From the start of the winter season the airline will base two additional aircraft at the airport and begin flying up to twice daily to Bristol and East Midlands, and up to four times daily to Liverpool. Both the Bristol and Liverpool routes were previously served by Flybe back in 2006. East Midlands is a new destination for Flybe. Ryanair’s routes at Belfast City accounted for 820,000 passengers at Belfast City in 2009, or 31% of the airport’s annual total.

Mike Rutter, Flybe’s Chief Commercial Officer commented: “We are delighted to be able to introduce these three crucial routes following last week’s announcement by Ryanair to cease operations from Belfast City Airport and with it, services to Liverpool, Bristol and East Midlands as well as those to Scotland’s Prestwick airport. Flybe has been serving the community in Northern Ireland for over 26 years. We are wholly committed to continue providing comprehensive connectivity throughout the UK and beyond to convenient destinations at competitive prices with maximum flexibility and choice.”

Welcoming the announcement Tourism Minister Arlene Foster said: “I congratulate the airport operator for acting quickly to fill these routes, which were vacated by Ryanair. Flybe is an airline that has shown long-term commitment to Northern Ireland and today’s announcement confirms their continued investment here. The development of direct, convenient and competitive access services is critical to achieving tourism growth and strategic targets. Great Britain is a key source market for Northern Ireland tourism and Tourism Ireland has an exceptionally strong promotional programme under way this year, to restore tourism growth from this all-important market. Tourism Ireland will be working with Flybe in Great Britain to maximise the promotion of these new routes.”

Katy Best, Business Development Director at George Best Belfast City Airport said: “We knew there was significant demand for the routes vacated and we’re pleased to finalise an agreement with Flybe on three routes. Flybe is a long term partner and recognises our significant and continuing investment at the airport to provide world class facilities for passengers.”