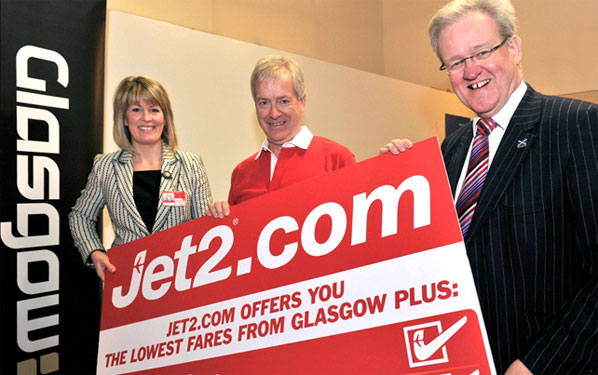 UK low-cost carrier Jet2.com has revealed that Glasgow Airport in Scotland will become the airline’s eighth UK base starting next summer. The airline has announced that it will start nine new routes starting at the end of next March. The new routes are:

Of the nine routes Thomson Airways operated eight of them this summer, while Thomas Cook Airlines was offering flights on seven of them. easyJet was present on three routes. Only the Nice route was not served non-stop from Glasgow this summer. A total of just 22 weekly departures will be operated across these routes, resulting in an average weekly frequency of just 2.4 flights per week. To operate this network the airline will base one 737 and one 757 at the airport.

Ian Doubtfire, Managing Director of Jet2.com, said: “We are thrilled to be launching at Glasgow Airport and feel that the region will benefit considerably from our friendly low fare service and the resulting investment into the area. It has been a turbulent time for the travel industry with some airlines and operators ceasing to trade this year. In contrast, we have continued to go from strength to strength – including the launch of a new base at East Midland’s Airport this time last year and significant growth from our existing airport bases. There is a considerable gap in the market at Glasgow Airport which we intend to fill. We will offer people living in and around the region a great choice of holiday destination, leading low fares, a generous 22kg baggage allowance, a loyalty scheme – MyJet2, allocated seating and convenient flight times. All this coupled with our outstanding customer service shows that we are never afraid to go above and beyond for our passengers.”

Amanda McMillan, Managing Director of Glasgow Airport, hailed the news as a major boost for Glasgow Airport and for the west of Scotland economy. She said: “We are delighted that Jet2.com has confirmed Glasgow Airport as their next UK base. Jet2.com is one of the UK’s most successful leisure airlines, offering low fares to a fantastic choice of sun, ski and city destinations. Their summer 2011 programme includes many of the Mediterranean’s most popular destinations and some newer favourites such as Tunisia and Egypt. As well as offering low fares to the sun, Jet2.com is creating 150 jobs at Glasgow Airport. At a time of economic uncertainty, this is further evidence of the importance of Glasgow Airport to the local and national economy, and underlines our commitment to attract new airlines and expand our route network. I would also like to take this opportunity to thank Scottish Enterprise, Glasgow City Council and Renfrewshire Council. These agencies provided support towards the delivery of this exciting new venture.”