Last month – the new Teheran service. One of eight new routes by Belavia in the last 16 months that has helped Minsk deliver 22% growth this year.  See also our recent analysis of Belavia .

Minsk International Airport, serving the capital of Belarus, is reporting passenger growth of 22% in the first eight months of this year. Operations at the airport are dominated by the national carrier which is responsible for around 70% of all flights and seat capacity. Passenger traffic doubled in just four years between 2003 and 2007 and the airport even reported modest growth (of 1.2%) in 2009, which for most airports across Europe was a difficult year. 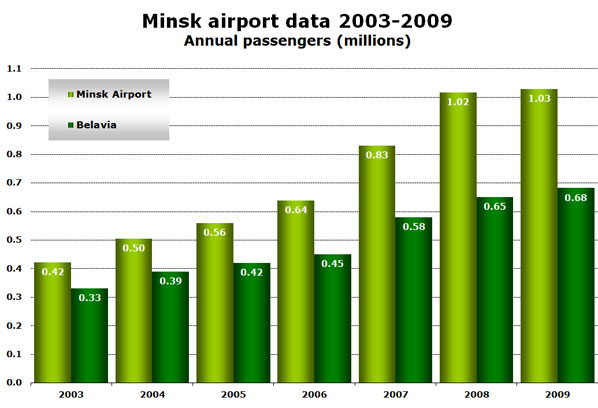 Demand is quite seasonal with passenger numbers in August this year being three times higher than those achieved in February. Based on performance so far this year, the airport is on target to handle over 1.2 million passengers in 2010. 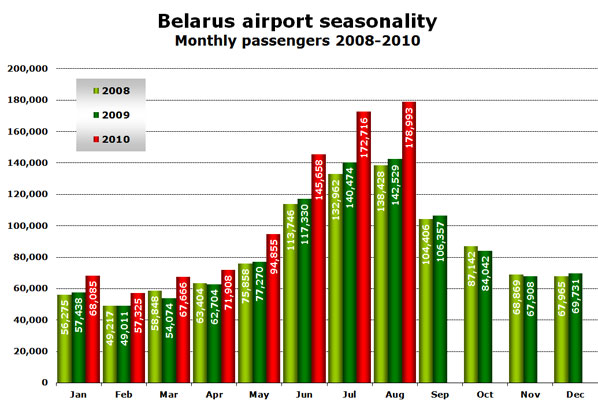 As of this August, Belavia’s General Director Anatoly Gusarov can offer the Swedish Ambassador to Belarus Stefan Eriksson a non-stop link to his capital city Stockholm from the striking airport in Minsk.

Belavia currently serves 27 destinations non-stop from the airport with its modest fleet of 737s, CRJs and TU-154s. Almost half of the airline’s network (by flights and seat capacity) is to destinations in Russia. Among western European cities served are Amsterdam, Berlin, Frankfurt, London, Milan, Paris, Rome and Stockholm. There are currently no scheduled services to Spain. During the last 14 months, Belavia has started seven new routes, with a further new route to Batumi in Georgia starting next week. In chronological order, they are: 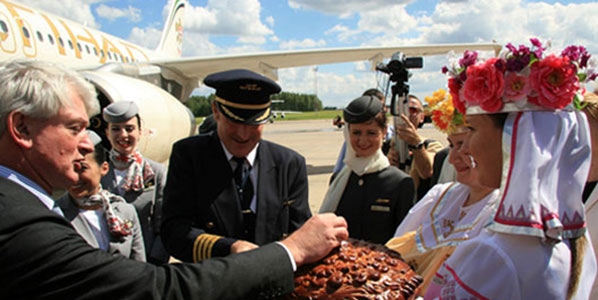 The last foreign carrier to start services to Minsk was Etihad Airways, which launched three times weekly services to Abu Dhabi in August 2008.

Just three other carriers operate at least daily flights to Minsk; airbaltic to Riga, Austrian to Vienna and Lufthansa to Frankfurt. However, several other flag carriers have less than daily flights to their hubs including CSA Czech Airlines, Estonian Air, Georgian Airways, LOT, Turkish Airlines and Turkmenistan Airlines. The last foreign carrier to start services to Minsk was Etihad Airways, which launched three times weekly services to Abu Dhabi in August 2008.