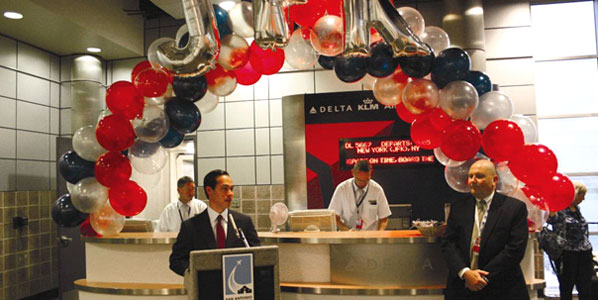 Cake of the Week:
easyJet’s Paris-Brest Yes, there is an established cake called Paris-Brest, the same name as the very route this cake is baked to celebrate! Although the cake was originally created 100 years ago for a bike race between the two cities, what better way is there to celebrate easyJet’s entry on the route this week? Jerome Le Bris, Brest Brittany Airport’s commercial and marketing director, and Andre Jourt, the airport’s VP, brought cake to the crew members who were too busy to attend the celebrations in the terminal. (Photos © Franck Betermin) -  Bake this cake yourself – see the recipe here . Blue1’s 717 and its crew were given a warm welcome to the Star Alliance hub Munich, just in time for Finns to travel to the ‘Oktoberfest’ celebrations. In opening the new route, the ribbon held by Munich Airport’s dirndl ladies Maria Kern and Anna Fritz was cut by Juha Järvinen, Blue1’s VP Commercial; Elisabeth Milton-Hemmingsen, SAS’ GM Central Europe; Oliver Dersch, Munich Airport’s Director Traffic Development; and a member of the Blue1 cabin crew, while the rest of the crew and the airline’s VP Communications Tom Christides (holding the scissor box) looked on. Stephen Ferris, the Ulster and Ireland rugby player, was on Manx2.com’s first flight between Belfast City and Cork. The route was also celebrated by Noel Hayes, chairman of Manx2.com, who had a pint of Murphy’s stout brewed in Cork, while Katy Best, business development director at Belfast City Airport, presented an Ulster fry. Accompanying them is none other than Miss Northern Ireland, Lori Moore. This impressive cake of a Venetian gondola and a Venice vista marked the announcement of CCM Airlines’ services from Marseille to Venice (thrice-weekly) and Florence (twice-weekly), which launch on 14 February. 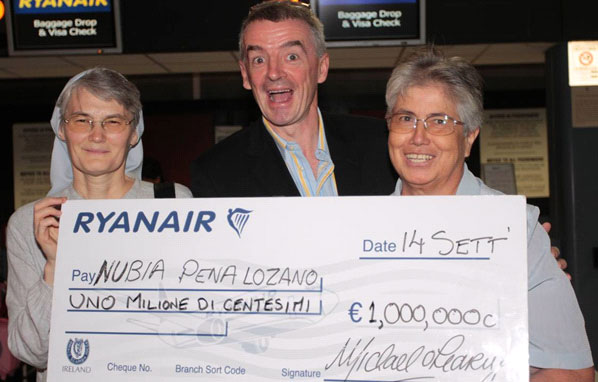 The richest nun in Rome? A fantastically generous (saintlike?) Michael O’Leary (centre) was on site at Rome Ciampino to celebrate Ryanair’s 100-millionth passenger to and from Italy; Sister Nubia Pena Lozano (right), who was joined at the airport by Sister Matgorzata Mazur (left). Sister Nubia gets a cash prize of no less than €10,000 (or one million euro cents, as it also can be expressed)! 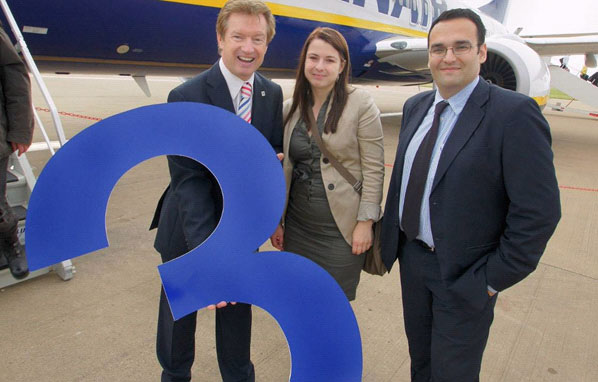 Ryanair also celebrated its 3-millionth passenger at Leeds Bradford. Katarina Radonakova, a Dublin accountant who regularly flies on business to Yorkshire, was welcomed by Tony Hallwood of LBIA and Laszlo Tamas of Ryanair. Virgin Blue celebrated its 10th anniversary and Sir Richard Branson took the opportunity to show off some dance moves with Australian dance group the Tap Dogs as well as singer Delta Goodrem and a good few of the airline’s crew. Group CEO John Borghetti settled for more conservative movements and hand-clapping. See the video below for full footage.