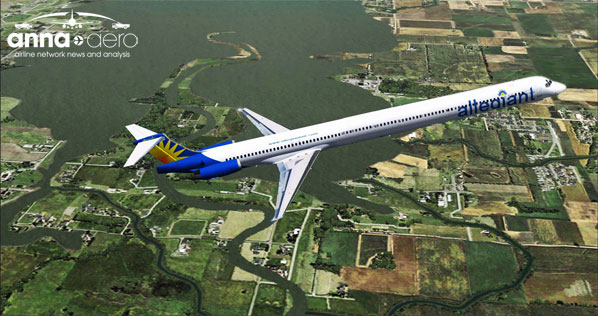 Allegiant is putting an extra 11% capacity on all routes at a stroke by adding an astonishing additional 16 seats to every one of its 50 beloved MD-80s by end 2012.

In the last few days Allegiant Air has announced plans to introduce a further seven new routes, all starting in November and all served with just two weekly flights. All of the routes are either to Florida or Arizona, which are leisure destinations, especially during winter for frustrated golfers.

The airline recently announced that it would be adding a further 16 seats to its MD80s taking seating capacity from 150 to 166. The aim is to have all 50-plus aircraft reconfigured by the end of 2012. The move will require the addition of a fourth cabin attendant on all flights.

In August Allegiant Air transported 517,680 passengers on scheduled services, up 22.8% on the previous year. Load factor was down slightly at a still impressive 89.9% while the average sector length was 895 miles (1432 kilometres).