Only the freshest pictures will do on anna.aero – the arrival of Frontier’s new twice daily Milwaukee- Hartford service on 27 September.

Bradley International Airport serves Hartford, the capital of Connecticut, as well as Springfield in neighbouring Massachusetts. In recent years it has seen passenger demand slump by rather more than the national average, but in the second half of 2010 eight new services will be started by five different airlines, helping to reverse the recent trend. At the start of the winter season Delta, JetBlue, Southwest and US Airways will all be launching new services to Connecticut, which last year ranked just outside the top 50 of America’s busiest airports. It is also home to the New England Air Museum. 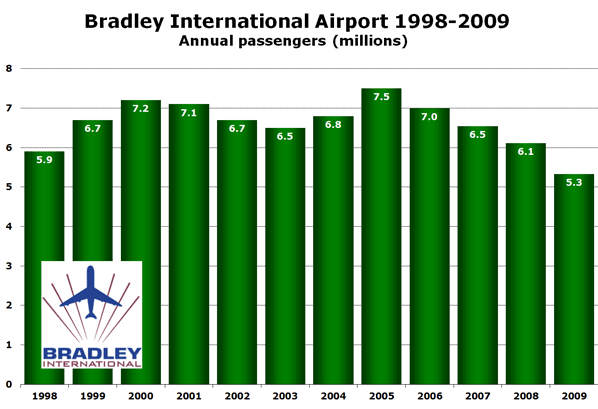 Traffic peaked in 2005 when the airport handled 7.5 million passengers. Last year passenger numbers fell by 12% to just 5.3 million, the lowest figure in over a decade.

Delta, Southwest and US Airways battle for #1 ranking

According to OAG data for September, Delta, Southwest and US Airways are the three leading airlines (as ranked by scheduled seat capacity), although US Airways operates the most weekly flights (156 to Delta’s 154). With 10 destinations Delta also currently offers more routes on a point-to-point basis. A total of seven airlines currently offer scheduled services, the others being Air Canada, American, Continental and United. Air Canada is currently the only carrier operating international services (multiple daily flights to both Montreal and Toronto), although Northwest has in the past offered daily transatlantic flights to Amsterdam.

In terms of individual routes the top six as measured by current seat capacity are Baltimore/Washington (operated by Southwest), Chicago O’Hare (American and United), Atlanta (Delta), Charlotte (US Airways), Philadelphia (US Airways) and Washington Dulles (United).

In mid-November JetBlue will become the airport’s eighth scheduled carrier when it begins double-daily services to both Fort Lauderdale and Orlando in Florida. Southwest begins its own Fort Lauderdale service a week earlier, while Orlando is already served by both Delta and Southwest. The following table shows the routes that will have started during 2010.

Fares have been rising since 2005

Fares at Bradley International airport have been climbing steadily in the last five years from a low of $153 in 2005 (coinciding with when demand was highest). Since then the airport’s average fare premium across all markets has been steadily rising (except in 2009) for the first quarter of each year. The fare-premium in short-haul markets has been particularly high reaching +32% above average in the latest published figures from the US DOT Office of Aviation Analysis for the first quarter of 2010.

Get Europe in Connecticut!