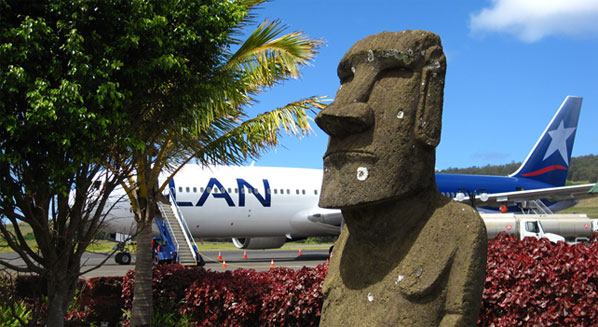 Chilean consumers have lots of choice – while LAN dominates the domestic market with 62% of capacity (flights and seats) Sky Airline has taken a 28% share since it began operations in 2001 while Aerolinea Principal accounts for the remaining 10%. As a result the busiest domestic route - Santiago to Antofagasta – has a generous 17 daily flights spread across the three carriers.

Measuring almost 4,500 kilometres in length, but on average less than 200 kilometres wide, Chile is bordered by the Andes to the east and the Pacific Ocean to the west. With a population of around 17 million people, its population density is similar to fellow Latin American countries Brazil, Peru and Uruguay. The country’s air transport industry is centred on the capital, Santiago, whose airport last year handled just over nine million passengers. According to OAG the country has 16 airports offering scheduled services, though Santiago accounts for just under half of all flights and over half of all seat capacity.

Santiago International Airport (also known as Comodoro Arturo Merino Benitez International Airport, in honour of the founder of the Chilean Air Force) handled just over nine million passengers in both 2008 and 2009. Passenger numbers are split fairly evenly between domestic and international although the domestic share has risen slightly from 46% in 2008, to 49% in 2009 and 51% in the first seven months of 2010. 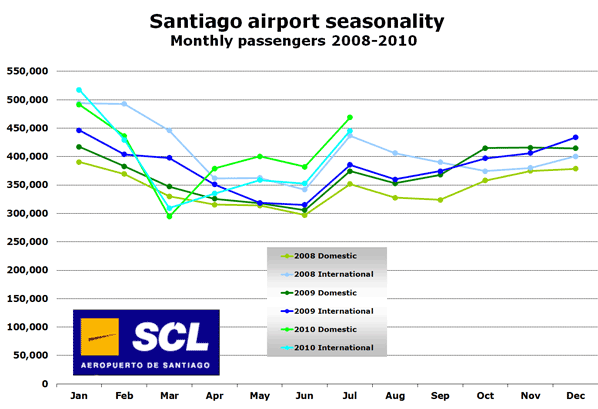 The major earthquake centred in Chile on 27 February of this year, resulted in air traffic dipping in March, although traffic levels had returned to normal by April.

A total of 19 countries can be reached non-stop from Chile. Most of these are in Central or South America but also include France, Canada, New Zealand, Spain and the USA. Neighbouring Argentina is the leading country market and is served by LAN, Aerolineas Argentinas, Gol and Sky Airline, Chile’s second biggest carrier. 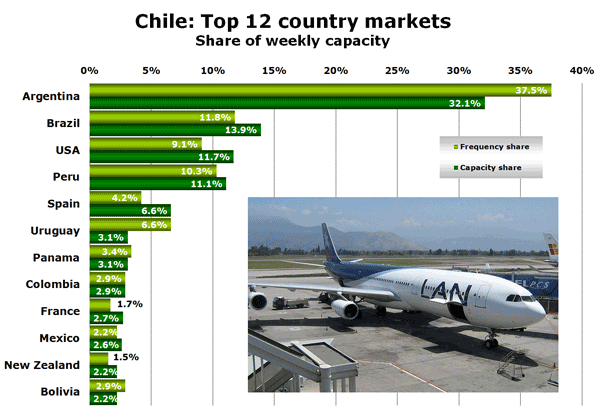 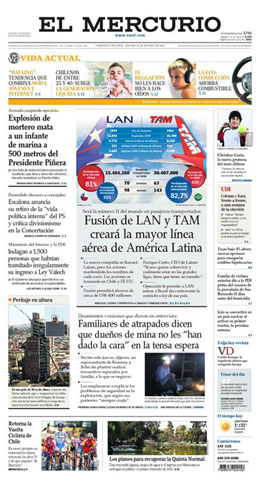 The LAN-TAM tie-up is obviously a big pre-occupation; it doesn’t offer much existing overlap – more the hope that the powerful new enterprise will develop more new routes to Europe and the US. See anna.aero’s analysis.

Atlanta (Delta), Dallas/Fort Worth (American), Miami (American and LAN) and New York (LAN) are all served daily with non-stop flights while Air France offers daily flights to Paris CDG, and Iberia and LAN both serve Madrid, though since both carriers are members of oneworld the competition is probably not that intense.

A total of 17 airlines offer non-stop international services from Chile with LAN by far the biggest, with a 60% share of both flights and seat capacity. Aerolineas Argentinas and TAM each have just over 5% of seat capacity followed by American Airlines (4.5%) and Sky Airline (4.0%). 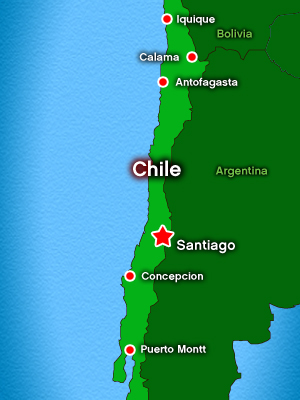 LAN also dominates the domestic market with a 62% share of flights and seat capacity. Sky Airline which began operations in December 2001 operates 11 737-200s and two A320s and has a 28% share of the market. Aerolinea Principal accounts for the remaining 10%. The busiest domestic route is between Santiago and Antofagasta in the north of the country. LAN currently operates 70 weekly flights on this route, while Sky Airline offers 30 more and Aerolinea Principal a further 18, resulting in around 17 daily flights spread across the three carriers.