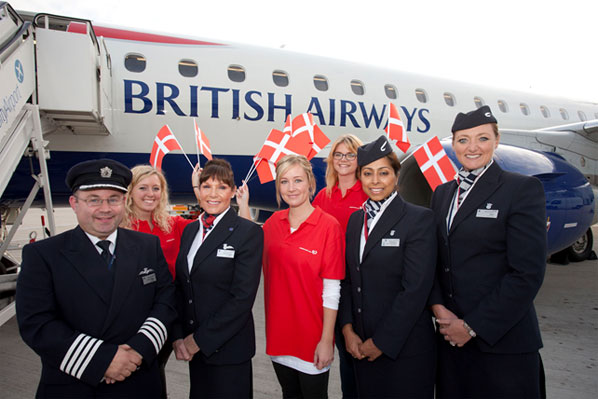 Analysis of demand trends across 12 major European countries reveals that during the last four months just two (the UK and Ireland) have failed to report year-on-year growth in passenger numbers passing through the country’s airports. Arguably, these two countries have been hit hardest by the recent economic downturn, but have not been helped by the introduction of a departure tax (in Ireland since last May) and airline strikes (in the UK). For the UK this is now the third successive summer during which passenger numbers have fallen, something that government ministers will no doubt point to (wrongly) as ‘proof’ that a third runway at Heathrow is not required. 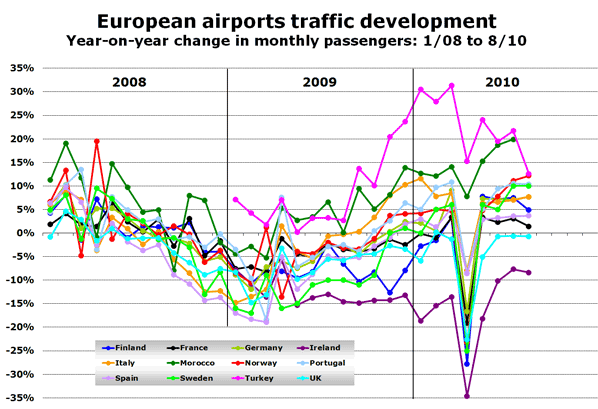 Among western European countries Norway and Portugal have performed well this summer, with Sweden also reporting double-digit growth in each of the last two months. However, the true stars remain Turkey and Morocco (which is included in Europe as it has an open-skies agreement with the EU). Although Turkish airport growth was at its lowest level in August since last October it remained a healthy 12.6%. For the moment traffic statistics from ONDA in Morocco appear to have disappeared from the organisation’s website, a situation that will hopefully soon be corrected.

German eco-tax impact in 2011; BA to lose out in APD increase?

For the last four months German airport traffic has been growing at a steady 7% to 8%. All that is likely to change in early 2011 as airlines are already being obliged to introduce the government’s new “eco-tax” which is designed purely to generate €1 billion for the country’s treasury. Departing passengers will be charged €8 for domestic flights and most European and North African routes. While Morocco, Libya, Algeria and Tunisia fall into the €8 category, passengers heading for some winter sun in Egypt will have to cough up €25 in departure tax.

Domestic return flights will be charged for each segment resulting in a total charge of €19.04 (two lots of €8 plus 19% sales tax). Curiously no attempt has been made to differentiate between economy and business passengers as with the UK APD, which itself is set to reach new heights from the beginning of November. Analysts are already pointing out how much passengers could save by travelling from the UK via Amsterdam or Paris, for example, for long-haul flights, although they may have to make two separate bookings and collect their baggage (if they have any) and re-check it at their transfer point. This could be particularly bad news for British Airways, who are more dependent than most European carriers on their long-haul network for profitability.