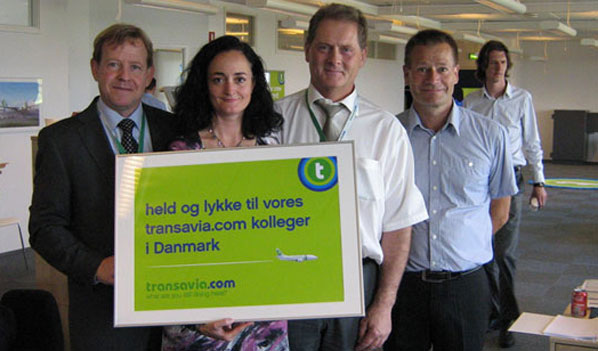 August 2009. The message reads: “Good luck to our Transavia.com colleagues in Denmark.” Sadly Transavia.com will close down the Copenhagen operation by 1 April 2011 after operating 14 routes this summer.

When Copenhagen-based Sterling collapsed at the end of October 2008 several low-cost carriers rushed to fill the gap in the market left by the carrier’s demise. Norwegian opened a base within two weeks while Dutch carrier Transavia.com set up a base in December 2008. Meanwhile some of Sterling’s assets, including aircraft and crew, were snapped up by local carrier Cimber which then rebranded itself as Cimber Sterling. As a result several routes such as Barcelona, Malaga, Nice and Rome were operated by all three new entrants with additional competition coming from the likes of SAS and Spanair.

Now Transavia.com has announced that it plans to cease operations in Denmark by 1 April 2011, possibly earlier depending on the consultation process it is legally required to undertake by Danish law. This summer the airline operated to 14 destinations from Copenhagen during the peak summer season, comprising Alghero, Barcelona, Chania, Hurghada, Malaga, Montpellier, Naples, Nice, Palma, Palermo, Pisa, Pula, Rome and Venice Treviso. These routes generated 44 weekly departures (or just over six daily flights), equivalent to about three aircraft. In addition during the winter season the airline also operated routes to Gran Canaria, Innsbruck, Salzburg and Tenerife Sur.

Even during the peak summer season Transavia.com’s capacity represented just 2% of the airport’s total, considerably less than Cimber Sterling (8%) and Norwegian (11.5%).

”We are aware that the possible closure in Denmark is sad news for many of our employees and it is for us too. After two years in Denmark we have unfortunately not been able to meet the business goals we set for operating in Denmark. Consequently, the only rational decision is to initiate the consultation procedure to close our operation in Denmark,” says Michiel Meijer, CEO for Transavia Denmark APS. “With the overcapacity in the market transavia.com assesses that it is unlikely that the Danish operations will contribute sufficiently to the company’s benefit in the near future. The reason for this is primarily the overcapacity in the Danish market but also other external factors like the Icelandic ash cloud, the economic crisis and the dollar exchange rate.”