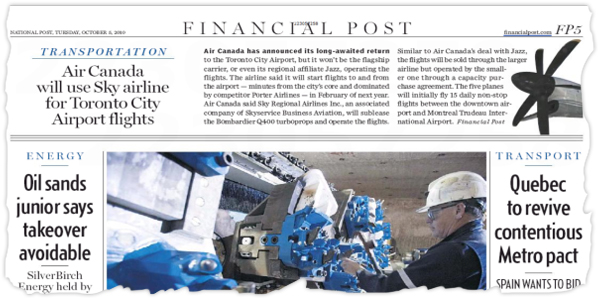 Air Canada has finally won its battle to regain access to the downtown Toronto City Airport, home to Porter Airlines. (Both Porter and the terminal facilities are commonly owned by REGCO Holdings which terminated the leases of both Air Canada and its subsidiaries in 2006.) Subject to a few minor issues, Air Canada will resume flights next February, offering up to 15 daily flights to Montreal. The route will be served by five Bombardier Q400 aircraft operated by Sky Regional Airlines, who will sublease the aircraft to Air Canada.

“We are very excited to return to Toronto City Airport in the coming months,” said Ben Smith, Executive Vice President and Chief Commercial Officer, Air Canada. “These arrangements mark solid progress as we work to develop a unique product tailored to meet the diverse needs of travellers between Canada’s two largest cities. Our customers have told us they want an airport option close to downtown Toronto to complement our Rapidair service which offers flights up to every 30 minutes at peak times.”

Billy Bishop Toronto City Airport is currently home to Porter Airlines which operates almost 400 weekly departures to six domestic destinations (including over 110 per week to Montreal) and three in the US (Boston, Chicago Midway and Newark). The airline has recently started reporting some traffic statistics and reports that its September load factor was 55.8%, up from 47.6% in September 2009. It also claims to have had an industry leading break-even load factor of just 49% in 2009. However, since the airline also reports that its average load factor in the first nine months of last year was just 46.7% it seems likely that the airline did not make a profit. Based on weekly seat capacity Toronto City Airport is now the ninth busiest in Canada.