Alitalia has over half of domestic market but Ryanair is twice as big on international routes; easyJet #1 at Milan Malpensa 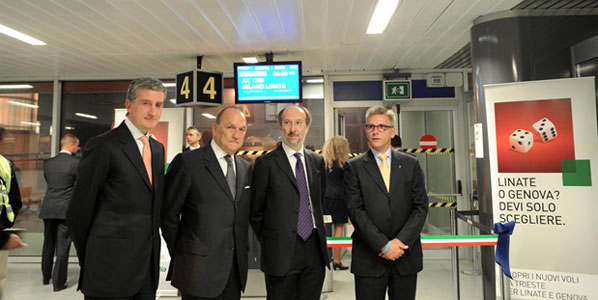 When anna.aero last did a country profile on Italy the future of the nation’s flag-carrier, Alitalia, was in considerable doubt. Two and a half years on and a slimmed-down Alitalia still exists having merged with Air One, with both brands still operating in the market. Although now in private hands (and 25%-owned by Air France/KLM) the carrier has yet to significantly improve its reputation or financial performance.

Passenger numbers at Italy’s airports in 2009 fell by a relatively modest 2.3% after falling 1.8% in 2008. However, domestic traffic actually grew in 2009 and now represents 43% of the total. Between 1999 and 2009 domestic traffic grew by just under 40%, but international traffic increased twice as quickly. 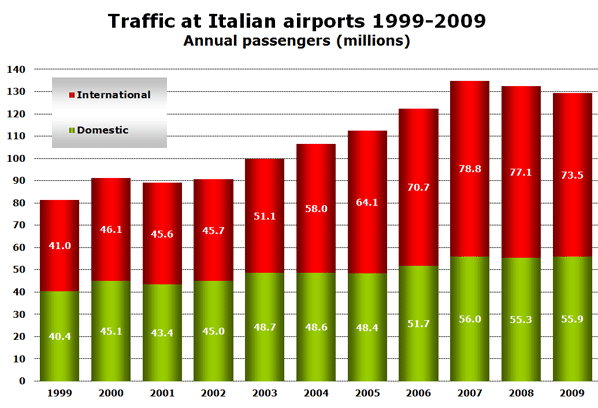 So far in 2010 (January to August) domestic demand is up 5% while international traffic has grown by 6.3%.

Based on OAG schedule data for October Alitalia (combined with Air One) has just over 50% of domestic seat capacity, and operates around 53% of all domestic flights. Ryanair has around 13% of seat capacity (from 46 domestic routes), followed by Meridiana at 12% (operating 38 domestic routes), and Wind Jet and easyJet who both have between 7% and 8% of the market. Lufthansa Italia’s four domestic routes from Milan Malpensa give it a 1% share of the market, ranking it behind both Air Italy and Blu-Express who have around 3.5% each.

Following the merger with Air One, Alitalia now has at least a 40% share of seat capacity at just two of Italy’s top 15 airports, Rome Fiumicino and Milan Linate. It has at least a 30% share at a further five airports. 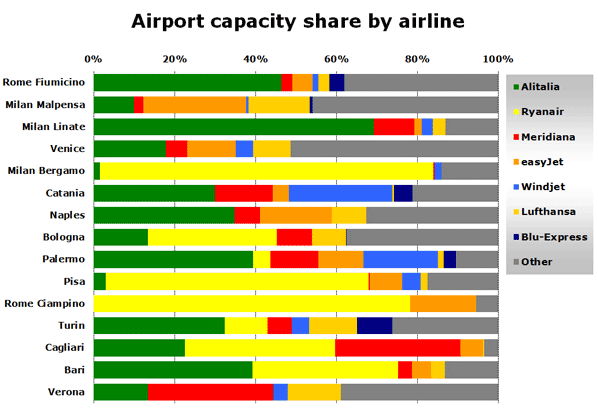 Ryanair is the leading airline at five airports of the top 15 airports; Milan Bergamo, Bologna, Pisa, Rome Ciampino and Cagliari. easyJet is number one at Milan Malpensa, while Meridiana comes top in Verona.

Alitalia has just 12% of international capacity

Despite the merger with Air One, Alitalia has fallen to a distant second behind Ryanair when it comes to international seat capacity. Even Lufthansa now operates more international flights to and from Italy than Alitalia.

Although a total of 81 countries are currently served by non-stop services from Italian airports, just four countries account for over 50% of seat capacity. Since our analysis in February 2008 the order of the top four country markets has remained unchanged with Germany leading Spain, the United Kingdom and France.

The United States is now ranked fifth in seat capacity with 3.6% of the market followed by Belgium and the Netherlands. There are 23 airline services between the US and Italy with Alitalia now operating eight routes, followed by SkyTeam partner Delta (six routes), American (three routes) and Continental and US Airways (with two each). All transatlantic services operate from either Milan Malpensa or Rome Fiumicino with the notable exceptions of a daily Delta service from Venice to New York, and a thrice-weekly Delta service between Pisa and JFK.