Asiana growing in China and Japan; five US routes account for one-third of all ASKs March 2010: Asiana became the first-ever airline into the new Japanese airport of Ibaraki (a sort of Tokyo version of Brussels Charleroi or Phoenix Mesa). Network growth has been recently modest, and led in importance by new international services – routes to China and Japan each account for around 30% of the airline’s weekly seat capacity.

Korea’s second airline, Asiana, was founded in 1988 and has been a Star Alliance member since 2003. Earlier this year the airline won Skytrax’s Airline of the Year award for the first time beating Singapore Airlines, Qatar Airways and Cathay Pacific. With a fleet of over 70 narrowbody and widebody passenger and cargo aircraft Asiana carried 13.4 million passengers last year, down around 5% on the previous year when just over 14 million passengers were transported. Average network load factor also fell slightly last year from 74% in 2008 to just under 73%. 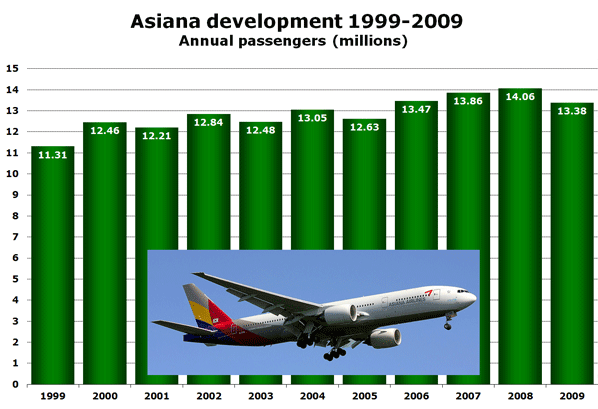 New routes to Japan and China; US biggest market by ASKs

In the last two years the carrier’s network growth has been modest. From its main base at Seoul’s Incheon airport Asiana has added three new routes to Shizuoka in Japan (June 2009), Ibaraki in Japan (March 2010), and Huangshan in China (May 2010). In addition it has also added double-daily flights from Seoul Gimpo to Osaka Kansai at the end of 2008. 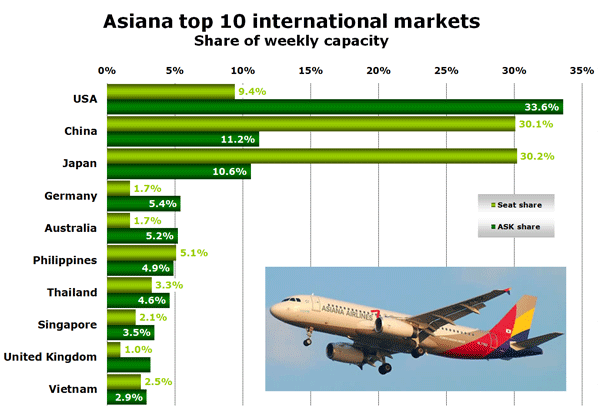 While routes to China and Japan each account for around 30% of the airline’s weekly seat capacity, when sector length is taken into account the airline’s five routes to the US end up representing one-third of all weekly ASKs, more than the next four country markets combined. In total the airline serves 20 countries including France, Kazakhstan and Russia but operates only three flights per week to India (Delhi).

Korean Air twice as big in key US market

Asiana’s key US market comprises five routes. Los Angeles is served twice daily, New York JFK daily and Chicago O’Hare, San Francisco and Seattle each with either four or five weekly departures. A summary of non-stop services between Korea (Seoul Incheon) and the US is provided in the following table.

Asiana’s 34 weekly flights are less than half of its local rival Korean Air which operates 81 weekly departures from Seoul to US destinations. US carriers operate just 12 weekly flights accounting for just 10% of the market. Korean Air competes head-to-head on all five Asiana routes, but also operates five other routes without competition.