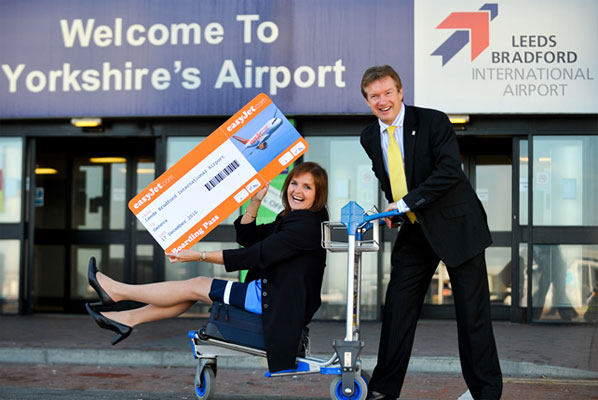 Earlier today: easyJet announces its first-ever Leeds Bradford route – five flights a week to Geneva (17 December to 24 April 2011). LBIA’s fortunes – up by almost 4% by end-August – have contrasted with the UK overall which looks set to post a third successive year of declines. However, there was only great happiness at LBIA today where Tony Hallwood, Commercial and Aviation Development Director, declared: “easyJet’s high frequencies will allow far more than just weekly and weekend leisure ski breaks, but will also attract business travel and inbound tourism to Yorkshire.” When asked about any further easyJet routes to LBIA, Ali Gayward, easyJet UK Commercial Manager was also optimistic: “We will ensure the success of the new route first, but we are always looking for new opportunities.”

While overall demand for air travel to, from and within the UK is still on a slight downward trend (and about to get a further kick in the teeth from the significant increase of the government’s treasury-boosting Air Passenger Duty, particularly on long-haul flights) it is worth remembering that the country’s airports still handle more passengers than any other country in Europe. Passenger numbers may have fallen two years running for the first time in over 30 years (and will probably fall again this year) but UK airports still saw over 218 million passenger movements in 2009, more than in Spain (187 million), Germany (182 million), France (140 million) and Italy (130 million). 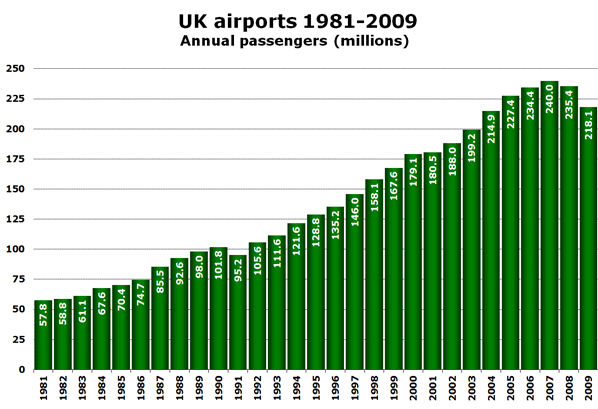 So far 2010 has not been a good year for most UK airports. Bad weather in January followed by the consequences of the Icelandic volcano eruption in April made for a bad first four months. But since then there have been fewer ‘excuses’ for poor performance. Passenger numbers across the UK’s airports in June, July and August were remarkably similar to last year so anna.aero this week takes a closer at what lurks beneath this apparent stability in demand. By comparing international traffic from UK airports for the period May to August in 2010 with the same period in 2009 some interesting and notable variations can be seen.

Across all country markets the difference in passenger numbers for the two periods examined is just 240,000. In May to August 2009 there were 70.62 million international passengers at UK airports compared with 70.38 million a year later, a difference of just 0.3%. Among the biggest 12 country markets (as defined by the CAA) nine of them reported a change of more than 3% (either positive or negative) since last year. 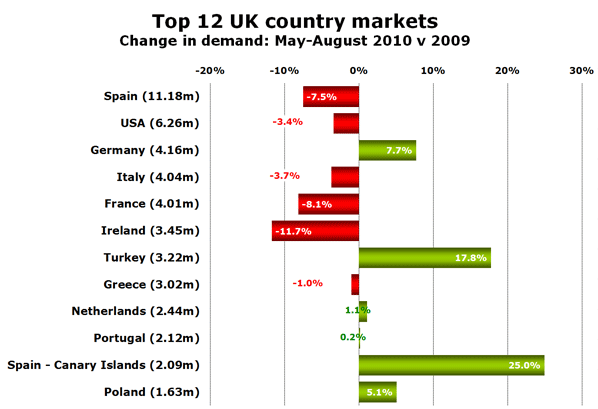 Five of the top six country markets reported declines of at least 3% over the summer, with only Germany (the healthiest of the European economies?) reporting growth. The surge in traffic to Turkey and the Canary Islands also suggests that Brits were still more than happy to take overseas holidays if the price was right. The Canary Islands in particular have benefited from new Ryanair services from several UK airports, much to the annoyance of the traditional charter carriers.

The Polish market which went through massive growth after joining the EU has recently been declining but there are signs that the market is now picking up once more. Not surprisingly the Irish Tourism tax introduced last May has continued to take its toll on the UK – Ireland market where the impact of a flat €10 surcharge has been felt more keenly as the resultant fare increase is higher given the lower average fares normally associated with such a short-haul market.

If instead of examining percentage change, volume change is analysed, then Turkey becomes the fastest-growing market with an additional 490,000 passengers during these summer months. Two other non-EU leisure markets, Egypt (+10%) and Morocco (up 60%), also make the top six in terms of volume growth along with Lithuania. Here the launch of new scheduled services by Ryanair from Kaunas to Bristol, Edinburgh and London Gatwick have helped stimulate demand, as well as services from the capital Vilnius to London Gatwick (with airBaltic), and Edinburgh and London Stansted (with the now grounded Star1). As a result the Lithuanian market is up 80% this summer compared with 2009. 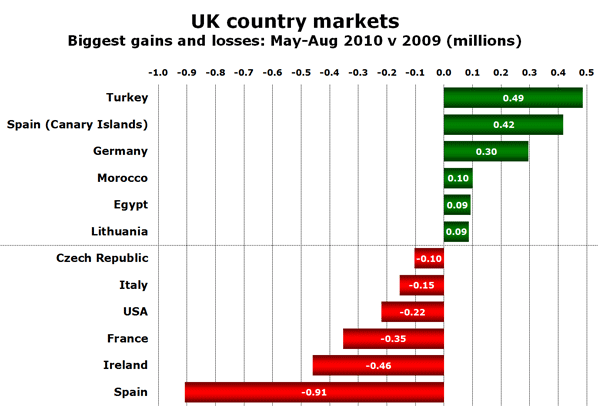 At the other end of the scale Spain (excluding the Canary Islands) lost over 900,000 passengers from the UK in just four months. Most of the other big volume losses came in large markets such as France, Ireland, Italy and USA. The appearance of the Czech Republic (basically Prague) demonstrates how holiday trends can change rapidly. A few years ago Prague was one of the fastest-growing destinations in the UK thanks primarily to its relatively cheap alcohol, making it a trendy destination for the UK’s short weekend break market, travelling on low-cost carriers. However, demand is down 18% this summer as the city suffers from what might be termed “Bilbao syndrome”. And from this winter CSA Czech Airlines will withdraw from the UK market completely, axing its last remaining services to London Heathrow and Manchester.

With the increase in APD from 1 November (9% on flights up to 2000 miles, 33% on flights between 2000 and 4000 miles, and up to 55% on flights of over 4000 miles) it will be interesting to see which markets weather the storm best in 2011. However, the combination of this further taxation, the cancelled Heathrow runway, and the beautiful timing of a fragile recovery, could all conspire to produce another decline in air travel demand for an unprecedented fourth straight year in 2011 as the UK government sees if it can ruin the UK air transport industry’s much-envied competiveness in the same way that strikers self-destructed British car manufacturing in the 1970s.