Route of the Week:
Kingfisher Airlines’ Bengaluru to Mysore 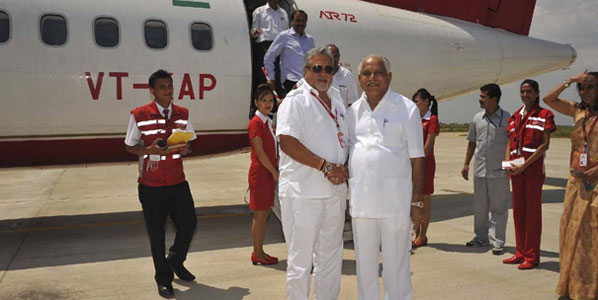 Vijay Mallya, Chairman & Managing Director of Kingfisher Airlines, and the Chief Minister of Karnataka, Shri B S Yeddyurappa, arrived on the inaugural flight between Bengaluru (Bangalore) and Mysore on 1 October. The airport has just been renovated to accommodate ATR aircraft and the local government has lobbied for the service.

Cake of the Week:
American Eagle’s Miami to Gainesville When American Eagle was welcomed to Gainsville, Florida, the airline’s mascot ‘RJ’ had to fight University of Florida Gators’ mascots over a piece of the cake. Supporting RJ were fellow American Eagle employees Dale Morris, managing director state and community affairs, and Curt Bass, schedules analyst as well as University of Florida alumni. From 1 October, the airline feeds its Miami hub with two daily flights from the northern Florida city. 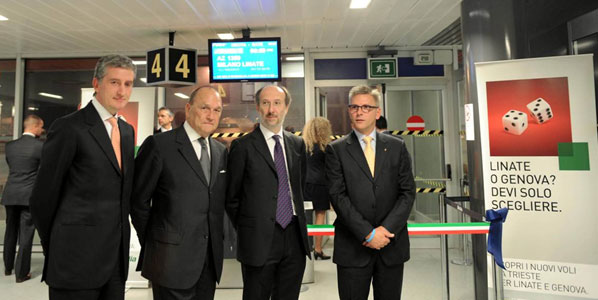 Cutting the ribbon for Continental Connection’s new service between Mid-Ohio Valley Regional Airport and Cleveland. This is the only scheduled service to the West Virginia airport, which until now has been connected with United’s Washington Dulles hub. EgyptAir’s returned to Copenhagen with a Star Alliance branded 737-800. The three flights a week between the capitals of Egypt and Denmark reinstate services that the airline last operated in 2005, prior to its alliance partnership with locally based SAS. Carsten Nørland, Copenhagen Airport’s VP Sales spoke to Ashraf Abdel Hafez, EgyptAir’s Country Manager for Denmark and, after a speech by Magda Metwali, EgyptAir’s GM Marketing, Nørland shook hands on the route with Egypt’s Ambassador to Denmark, Nabil Habashi. 204 passengers arrived on Iceland Express’s very blue 757 on its first flight to Orlando Sanford. Flights will operate once a week for four weeks, competing with Icelandair to the Florida airport. Ural Airlines’ first A320 from Ekaterinburg was warmly welcomed to Sofia with a fire-truck salute. A gorgeous cake was laid on display for Alexey Fomin, Ural Airlines’ deputy general director, by Sofia Airport’s Mariana Kirilova, Director Aviation Marketing & Corporate Communications, and Dimitar Bogdanov, Chairman of the Board of Directors, while Tanya Atanasova from the aviation marketing team presented the Ural Airlines crew with a bouquet made entirely of fresh fruits. A very clean A319: Volaris’ aircraft received a wash at both the Tijuana and Cuernavaca ends of the new route. The three weekly flights are Cuernavaca’s first commercial flights since 2008. 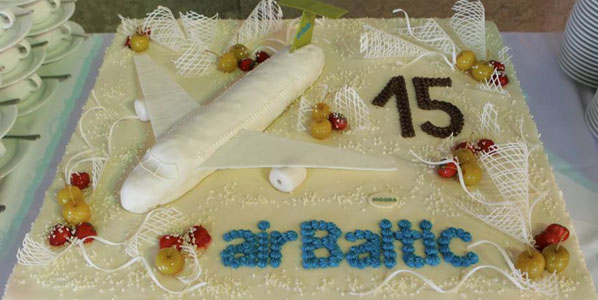 airBaltic, which just won the Budgie ‘Airline Pacesetter Award’, turned 15 years old on 1 October. Bertolt Flick, president and CEO, commented: “A lot of things have changed during the last fifteen years. airBaltic has grown from two to thirty-four aircraft, the network has expanded from five routes to almost 100. The Baltic States have gone through a period of uninhibited growth, followed by a recession without precedent. However, aviation in our home markets, the Baltics and Finland, has developed and the main beneficiary is the customer.” 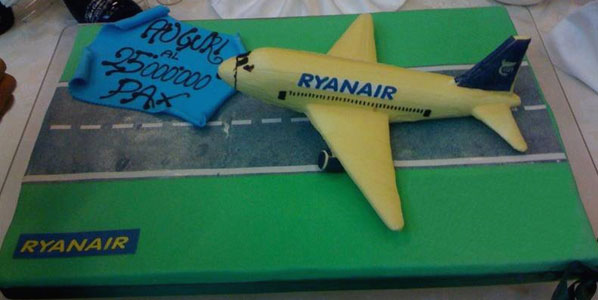 Ryanair has now transported 25 million passengers at Milan Bergamo! The Irish low-cost giant first served the airport on 14 February 2002 with a flight from Frankfurt Hahn that featured a wedding on board (!). After eight and a half years of operations, 11 aircraft are based at the airport, and as the 25 millionth passenger, a lucky English family won a Ryanair voucher and a free holiday offered by the airport and local tourism organisation. Most importantly, however, this giant cake was made, topped with a chocolate (!) Ryanair plane, to celebrate the event. 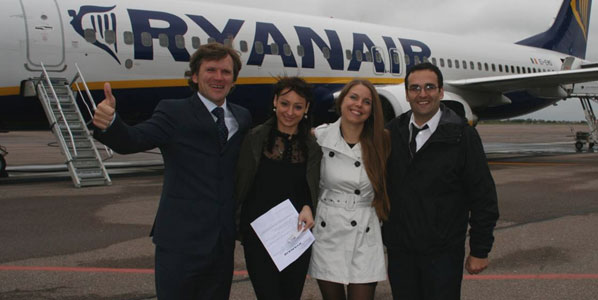 Ryanair celebrated its 2-millionth passenger at Kaunas, the Lithuanian airport that became a base for the airline in May this year. Laszlo Tamas (right), Ryanair’s Sales & Marketing Manager UK, Ireland & CEE, commented: “In the first 8 months of 2010, we carried already 478.000 passengers at Kaunas Airport, 74% more than in the same time last year.” A delighted airport GM Arijandas Sliupas (left) and Kaunas base supervisor Lina Barkauskaite (centre-right) celebrated with the lucky passenger.