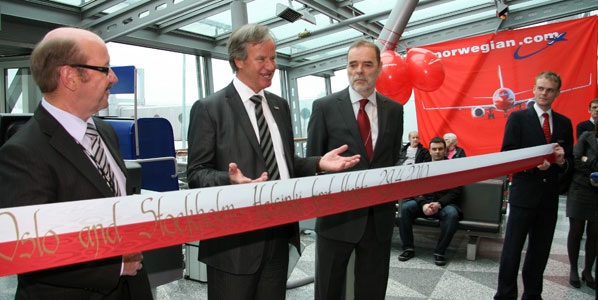 Norwegian’s CEO Bjørn Kjos himself travelled to Helsinki to open the two new routes from Oslo and Stockholm at the end of April this year. Was this honour maybe given the Finnish capital’s airport because it already then was decided that the airline later would open a base? By next summer, Norwegian will have three aircraft based in Helsinki.

Sooner or later, someone is going to figure out how to make the low-cost airline business model work in Finland. The latest LCC to decide to base aircraft in Helsinki is Norwegian, which plans to put three 737s at the airport from next summer. Norwegian started flying to Helsinki earlier this year, with double-daily flights from both Stockholm Arlanda and Oslo Gardermoen. From next March, a further nine international destinations will be served as well as two domestic destinations, Oulu and Rovaniemi. A summary of the new routes is shown below.

All of the selected destinations are already served by other carriers. “We are happy to announce that we are increasing our presence in Finland by opening a new base in Helsinki and basing three of our aircraft here. Norwegian entered the Finnish market in April, and after a mere five months our Helsinki-Oslo and Helsinki-Stockholm routes have proven to be a great success. We believe that both the Finnish business and leisure traveller are ready for more fares that everyone can afford to both domestic and international destinations,” said Norwegian’s CEO Bjørn Kjos.

Many LCCs have tried …

Previous efforts to serve Helsinki with low-cost flights reads like a ‘remember them?’ of low-cost airlines. Buzz (2001 from London Stansted), Vbird (2003-2004 from Düsseldorf Weeze), FlyMe (2004-2006 from Stockholm), volareweb (2007 from Milan Malpensa) and clickair (2007 from Barcelona) have all tried to serve Helsinki with low-cost flights, and are no longer around. The biggest attempt was made by Sterling in the summer of 2006 when it planned to base two aircraft at the airport. However, its network of low-frequency city and summer-sun destinations were abandoned after less than six months. Finland even briefly had its own LCC, Flying Finn, which operated between March 2003 and January 2004 from Helsinki to both domestic and international destinations using MD83s. A still operating LCC, germanwings, also tried flights from Cologne/Bonn between 2004 and 2007 before finally giving up on the market.

This summer, apart from Norwegian’s two existing routes, the only other genuine LCC operating at Helsinki was easyJet (from London Gatwick, Manchester, Paris CDG), while lower-cost airlines Aer Lingus (Dublin) and airberlin (Berlin Tegel and Düsseldorf) were also present. Hopefully, Norwegian’s reference to themselves in their press release as a ‘low lost’ airline was merely a typographical error and not a subliminal message…