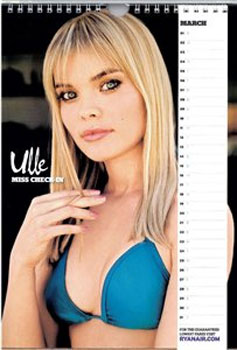 “Ulle” from Estonia was Ryanair’s 2009 March pin-up (sorry, Ryanair is totally new to Tallinn, we couldn’t find anything else).

The latest country to welcome Ryanair services is Estonia, as the airline has revealed plans to start seven routes to Tallinn from mid-December. There will be a total of 21 weekly departures with five routes served three-times weekly, Milan Bergamo twice weekly and Stockholm Skavsta four-times weekly. None of the routes face direct competition but on three of them Estonian Air and one other carrier operate to alternative airports serving the same city. According to the airport Stockholm, London and Oslo were the fourth, fifth and sixth most popular destinations from the airport, behind Riga, Helsinki and Copenhagen.

Ryanair’s 3,969 weekly departing seats compares with airBaltic’s 3,818 (across four routes) and Estonian Air’s 8,527 (across 11 routes). In 2009 Tallinn airport handled 1.35 million passengers, down 26% on the previous year. Passenger numbers in the first nine months of 2010 at Tallinn airport have reached 1,043,224 – which is a small improvement of 0.7% on the same period last year. Ryanair expects the routes (representing three daily flights on average) to generate 300,000 passengers per annum.

This base announcement comes only a few days after Ryanair’s Director of New Route Development Ken O’Toole spoke at the World Low Cost Airlines Congress, calling Ryanair’s approach to Eastern Europe conservative and referring to the market as “high cost, low fare”. It can therefore be presumed that no further Eastern European bases are to be announced anytime soon.