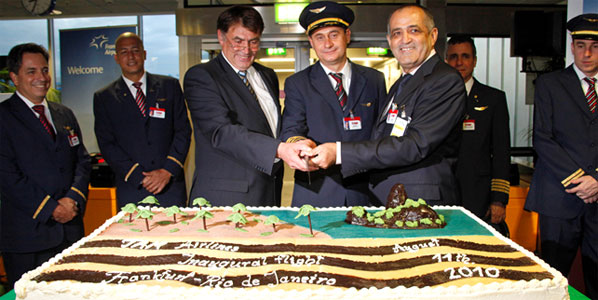 Demand for domestic air travel in Brazil continues to grow at an impressive rate. In July demand was up by over 15% while in August it was up by over 30% (as measured by RPKs). Even more impressively international demand was up 30% in both months, though it should be noted that in the same period last year international traffic was down around 10%. In mid-August TAM launched new non-stop flights from Rio de Janeiro to both Frankfurt and London. 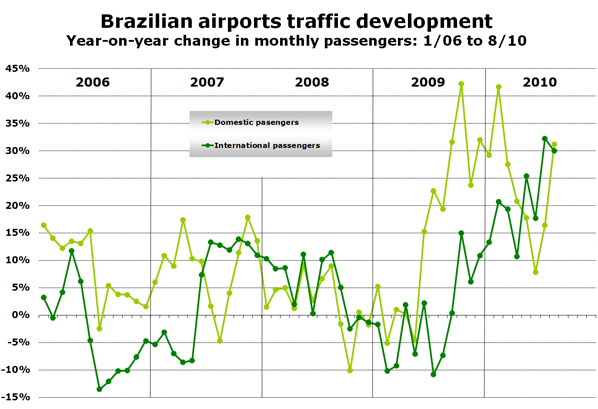 According to airport data provided by Infraero passenger numbers at Brazil’s airports in the first eight months of 2010 have reached 99 million, up 23% on 2009. Both domestic and international passenger numbers are up by over 20% so far this year. 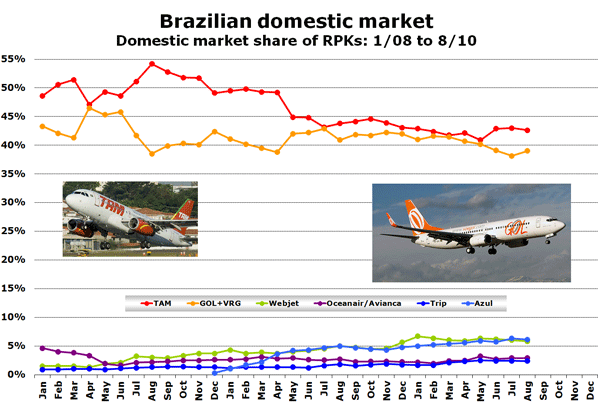 The newest entrant in the market, Azul, will celebrate its second birthday in mid-December. According to OAG schedule data the carrier now operates 33 domestic routes, of which 30 are operated with at least five weekly flights and 11 of which are operated with at least three daily flights on weekdays. Azul serves 23 domestic airports with its main base at Viracopos/Campinas airport around 100 kilometres from Sao Paulo. The airline currently operates a fleet of 20 Embraer E190/E195s with orders and options for up to 40 more. Earlier this year the airline announced plans to acquire up to 40 ATR 72-600s, with deliveries expected to start in 2011.

In the next couple of months the airline will add two new destinations to its network; Belem and Joinville. According to the airline’s booking tool flights between Viracopos and Joinville would appear to start on 10 November, while service between Belo Horizonte and Belem seems to begin on 4 November. Both routes will be served daily.