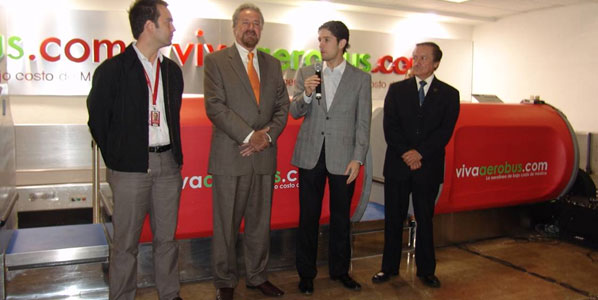 On 1 October, soon-to-be four years old vivaaerobus launched six new routes out of Mexico City, all of which used to be served by Mexicana. This makes the Mexican capital city its third biggest airport, after its two physical bases at Monterrey and Guadalajara.

Mexican LCC vivaaerobus will next month celebrate its fourth birthday, having begun commercial operations on 30 November 2006. It currently operates a fleet of 11 737-300s configured with 148 seats from two bases in Monterrey (eight aircraft) and Guadalajara (three aircraft). At the end of last week, the airline began six new routes from Mexico City to add to the two it started earlier in the year, as it joined several other airlines looking to take advantage of Mexicana’s recent demise to obtain valuable access to the nation’s biggest airport, serving the capital.

vivaaerobus’ main base at Monterrey is Mexico’s fourth busiest airport, handling 5.2 million passengers in 2009 (down 21% on 2008). This summer, the airline is serving 25 destinations from the airport, making it the second-busiest carrier in terms of weekly seat capacity at the airport after AeroMexico. The Guadalajara base offers non-stop flights to 12 destinations (all domestic), while Mexico City is now the airline’s third busiest airport, although no aircraft are based there. Responding to anna.aero’s enquiries, Roberto Valdez, the airline’s Chief Commercial Officer, revealed that the new routes have been made possible by increasing aircraft utilization rather than cutting back on existing routes or adding additional aircraft. 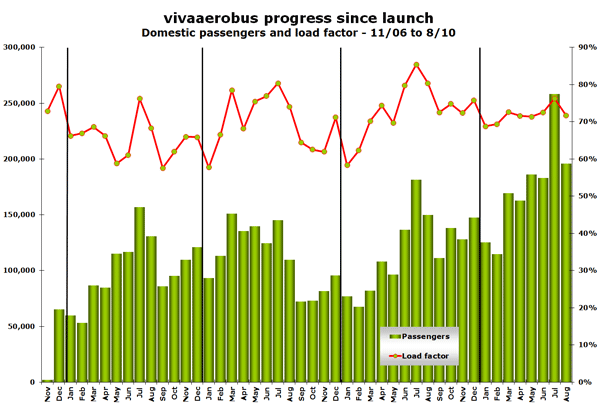 In early July, the airline carried its five millionth domestic passenger, although apparently this momentous event was not deemed worthy of celebration. That same month, the airline carried a record 258,000 domestic passengers, enabling it to claim more than 10% of the domestic market for the first time. Monthly load factors have only ever twice exceeded 80%, in July and August of last year. Based on traffic developments so far this year, the airline is on course to carry over two million passengers in a year for the first time.

International flights to the US began in May 2008 to Austin, Texas from both Monterrey and Cancun. In January 2009, Puerto Vallarta was added to the Austin network. However, the swine flu epidemic last May put paid to all three of these routes.