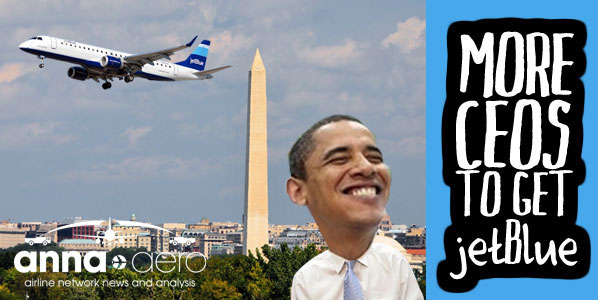 A slot-swap with American Airlines (which has given up its Washington Reagan-Boston route) enables JetBlue to enter DCA for the first time in November where it will take over Boston with six daily flights, and launch dailies to Fort Lauderdale and Orlando.

Washington Reagan airport (formerly known as Washington National) is a wonderfully convenient facility for the movers and shakers in US politics and those with business interests in the capital. Located just minutes from downtown Washington, the airport typically handles between 17 million and 19 million passengers per annum. It has three runways, but none are more than 2,100 metres in length. Being one of just a handful of slot-managed airports in the US means that airline routes tend not to come and go quite as rapidly as at other airports. 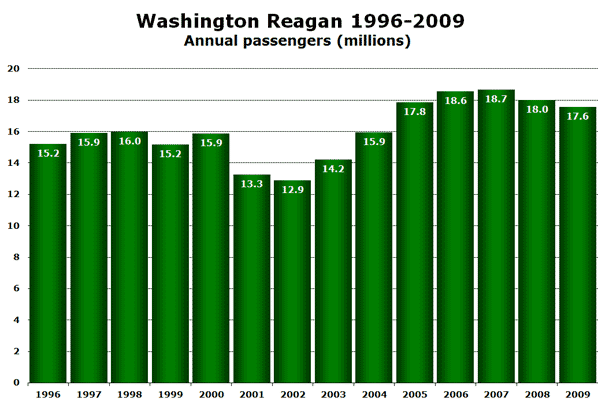 Thanks to an approved slot-swap with American Airlines (which has given up its route to Boston) JetBlue is able to start new routes this winter to Boston (up to six daily flights) and daily flights to Fort Lauderdale and Orlando. This marks the airline’s first ever routes to Washington National.

Despite not having a slot-swap involving US Airways and New York’s LaGuardia airport approved by the regulatory authorities, Delta has still managed to acquire enough slots to start seven new routes this winter requiring 21 daily departures.

US Airways remains the airport’s biggest user with a 43% share of seat capacity compared with 20% for Delta and 15% for American. A merged United and Continental have a 10% share, leaving Air Canada (the only foreign carrier at the airport), AirTran, Alaska Airlines, Frontier/Midwest, and Spirit Airlines as the remaining carriers.

Fares are among the highest in the US

Fares at Washington Reagan are among the highest in the country with the airport ranking in the top 10 of most expensive airports (for passengers) in each of the last four years.

The arrival of JetBlue and the acquisition of AirTran by Southwest will probably make little difference to average fares, as airlines exploit the high number of business passengers using the airport and their willingness to pay a premium for such convenience.