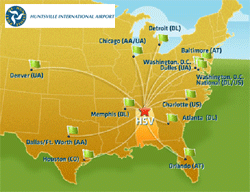 The US Department of Transportation’s Office of Aviation Analysis publishes quarterly updates on US domestic air fares. Its most recent publication is for the first quarter of 2010 and this week’s farewatch looks at which airports passengers pay the highest (and lowest) fare premiums in three different airport size categories. What this means is how much more (or less) in percentage terms do passengers on average pay at a particular airport compared with the national average

For airports handling at least two million departing passengers in the first quarter of 2010 the two most expensive airports for passengers are Newark and Houston Bush, both of which are Continental bases. Washington Reagan and Dallas/Ft. Worth (American’s biggest base) are not far behind with passengers having to pay on average around 25% more at these four airports than the national average. Three years ago Atlanta was the most expensive of these five major airports but fares have fallen since then, and may fall further next year when AirTran’s operation gets absorbed into Southwest. 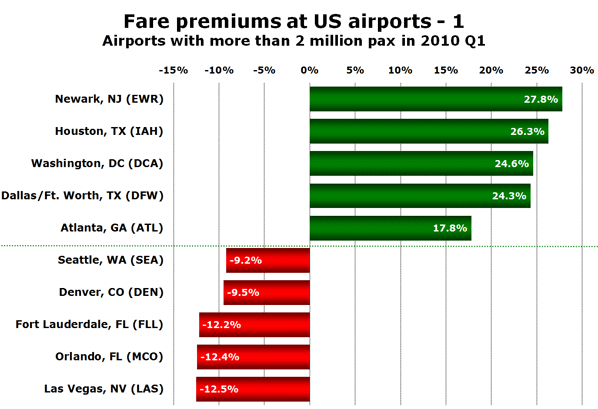 Competing to be the best value big airport for passengers are Fort Lauderdale, Las Vegas and Orlando, all of which are significant leisure destinations where lower fares are likely to stimulate traffic more than in other markets. These three airports all have average fares around 12% lower than the national average, followed by Denver, where Southwest’s growing network combined with Frontier’s operation has kept fares down.

Just three years ago (2007 Q1) Cincinnati registered a fare premium of 90%, making it by far the country’s most expensive airport for passengers. Since then things have improved but the airport is still the most expensive in this category, for airports handling between 500,000 and two million departing passengers in the first quarter of 2010. Memphis, which used to be a Northwest hub (now Delta), is almost as expensive with Clevelend (another Continental hub), Washington Dulles (a United hub) and Charlotte (a US Airways hub) vying for third place. 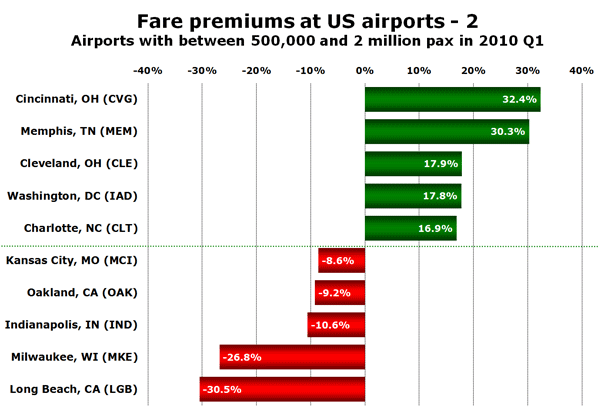 Long Beach is the cheapest in this size category thanks to jetBlue’s major presence and some Allegiant services. Milwaukee, which just three years ago had a fare premium of +1%, has seen average fares fall by more than a quarter as Frontier, AirTran and Southwest (who arrived amid much fanfare last November) are all battling for passenger loyalty.

Among smaller airports with between 100,000 and 500,000 departing passengers in 2010 Q1, two Florida airports (St Petersburg and Orlando Sanford) have the cheapest fares along with Bellingham in Washington state, where Allegiant is the leading carrier. Two other leisure destinations, Atlantic City and Myrtle Beach, round out the list of airports with the lowest fares. 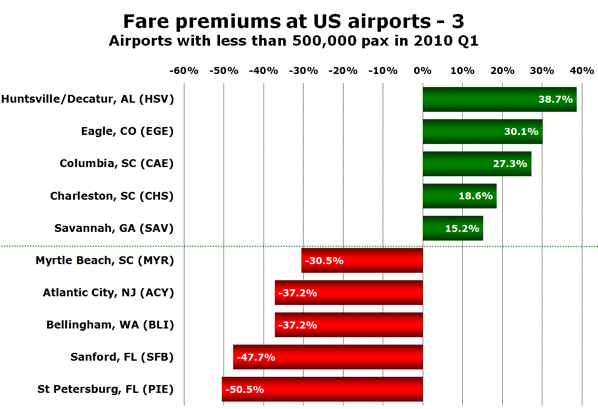 While Myrtle Beach in South Carolina has low average fares (ultra-LCC Spirit Airlines has a major presence here), two other airports in the state (Columbia and Charleston) have very high fares. However, topping the table, and thus earning the dubious distinction of being the most expensive airport in the US for domestic flights is Huntsville International Airport (HSV) in Alabama where average fares are almost 40% above the national average. In 2009 the airport handled just under 1.2 million passengers. A total of 12 destinations are currently served from the airport with all five US legacy airlines present. However, during the second quarter of 2010 AirTran launched two routes to Baltimore/Washington and Orlando, which may help bring down average fares, if only slightly. Obviously aware of its reputation, the airport has even set up its own petitioning website, wewantlowfares.com, for locals who want to demonstrate their support for cheaper flights.