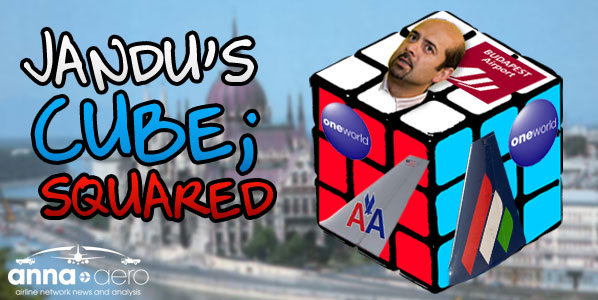 Budapest’s Director Aviation Kam Jandu: “The appearance of a major oneworld carrier in Budapest sends a strong message to other member airlines that the Hungarian capital is now starting to realize its oneworld hub potential.”

American Airlines has revealed plans to launch daily services from New York JFK to Budapest starting on 4 April 2011. This will compete head-to-head with Budapest’s only other transatlantic service provided by Delta, after Malev withdrew all long-haul flying at the end of the summer 2008 season. Jost Lammers, CEO of Budapest Airport, said “The vision of just a few people in the alliance and network planning team at American Airlines has lifted the profile of Budapest as being a One World hub with significant growth potential and we are delighted with their confirmation of this development”. Director Aviation Kam Jandu who has been working with his colleagues to realize this project since 2009 said, “Adding another long haul carrier is an achievement in itself under the present circumstances of the aviation industry, but more than that, the appearance of a major One World carrier in Budapest further broadens the offer, and sends a strong message to other member airlines that the Hungarian capital is now starting to realize its One World hub potential.”

Between now and the middle of next year, Hungary’s capital airport will also attract several other high-profile new routes. KLM returns on the Amsterdam route from the start of the winter season with three daily flights. Previously, the carrier had operated the route in co-operation with Malev, whose aircraft operated the service four times daily.

In January, Qatar Airways will become the first of the ‘MEB3’ (Middle East Big 3) airlines to serve Budapest, although the four-times weekly service to Doha will operate via Bucharest.

New low-cost services will also be operated by Jet2.com to Edinburgh (from 21 April) and by Wizz Air to Istanbul Sabiha Gökçen (from 2 March) and Antalya (from 18 June). Edinburgh will be served with three weekly flights, Istanbul with four and Antalya with two.

The leading airlines at Budapest currently are:

While easyJet operates six routes to Berlin Schönefeld, Dortmund, Geneva, London Gatwick, London Luton and Paris Orly, fellow LCC Ryanair is axing its 10 weekly flights across four routes to Bristol, Dublin, East Midlands and Glasgow Prestwick from the end of the current summer season. Of these, only Dublin is served by other carriers (Aer Lingus and Malev). Since Wizz Air already serves Glasgow Prestwick from some of its other Central European bases maybe it will be tempted to step-in and start a Budapest service.