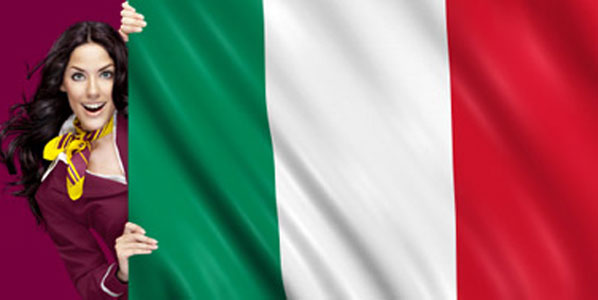 Angelika Schwaff, germanwings’ Spokeswoman & Head of International Communications, sent this to us. It’s not her.

In 2009, the number of passengers travelling between Germany and Italy was just over 10 million, making it the third biggest international country market from Germany after Spain and the United Kingdom, and only just ahead of Turkey and the USA. During the peak summer month of August this year, germanwings operated 50 weekly flights on 10 routes between Germany and Italy, giving it just under 5% of the scheduled market between the two countries. Based on seat capacity, Lufthansa had 44% of the market, followed by airberlin (23%), Ryanair (19%) and easyJet (5%). Alitalia had a mere 2.5% of the market, an incredibly low figure for a national carrier operating to one of the largest markets in Europe.

Earlier this week, Lufthansa reported that germanwings had carried 5.95 million passengers in the first nine months of 2010, an increase of 8.9%. The airline currently operates a fleet of 30 A319s, equipped with either 144 or 150 seats (easyJet’s A319s have 156 seats). However, to help rescue stranded passengers in Spain after the recent ATC strike, the airline leased a Boeing 747 to bring people home.

Closer to home, the airline has apparently succeeded in driving Intersky off the Cologne/Bonn to Friedrichshafen route, which germanwings only began operating with double-daily flights at the beginning of the summer season.