Route of the Week:
RAK Airways’ Ras al-Khaimah to Kozhikode and Jeddah Free bus tickets from other cities in the UAE to Ras al-Khaimah Airport are included in ticket prices on the relaunched RAK Airways. The airline now flies to both Kozhikode in India and Jeddah in Saudi Arabia. Celebrating the launch of Jeddah flights were the airline’s chairman Sheikh Omar Bin Saqr Al Qassimi and vice chairman Sheikh Salem Bin Sultan Al Qassimi, before being joined by CEO Omar Jahameh and officials in cutting the cake.

Cake of the Week:
SpiceJet’s Chennai to Colombo As SpiceJet launched flights from Chennai to Colombo, its second international route, an impressive cake with a clear message was baked to celebrate the event. The crew got so much in a party mood that the male cabin attendants got their ‘Saturday Night Fever’ shirts on. Allegiant arrived at Pueblo on its first flight from Las Vegas. Notably, the low-cost MD80 operator already flies to Colorado Springs, just up the road from Pueblo. 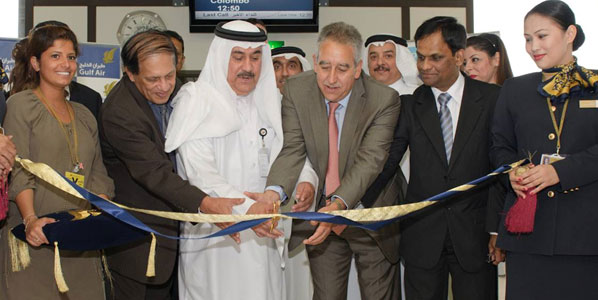 Gulf Air’s new five-weekly flights from Bahrain to Colombo reinstate services on the route after SriLankan Airlines dropped its flights only the previous month. The first flight was seen off by executives from Bahrain Civil Aviation Authority, Bahrain Airport Company and Gulf Air, including the airline’s CEO Samer Majali. A Pegasus aircraft cake was baked to celebrate the Turkish low-cost carrier’s arrival to the Georgian capital Tbilisi with daily flights from Istanbul Sabiha Gökçen. Pisa Airport celebrated five years as a Ryanair base yesterday, on 12 October. Ryanair has committed to Galileo Galilei Airport, the largest airport in Tuscany, as a continued base for the airline until 2016. Cutting the celebratory cake were Michael Cawley, COO and deputy chief executive of Ryanair, and Gina Giani, CEO Pisa Airport. Joining them were Salvatore Sanzo, tourism representative of Pisa Province, Marco Filippeschi, mayor of Pisa, and Costantino Cavallaro, chairman Pisa Airport. An open day was held at Chisinau International Airport on 3 October. Citizens of the Moldovan capital were given access to aircraft put on display and the national carrier Air Moldova flew its two A320s past the gathered spectators.