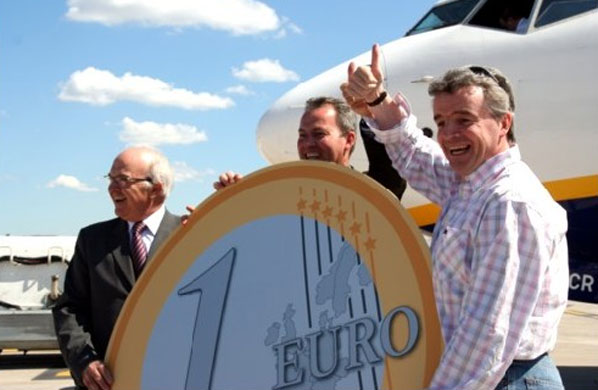 MOL opens the Marseille base in 2006.

Ryanair has announced that from 11 January 2011 it will close its only French base in Marseille, with the removal of four based aircraft and the reduction of its route network from 23 to just 10 routes. In the first nine months of this year Ryanair has handled 1.13 million passengers at Marseille airport (the same number as last year), representing just under 20% of the airport’s total of 5.74 million. Ryanair’s decision follows the commencement of legal proceeding against the carrier in a dispute as to whether staff employed by Ryanair in Marseille are working in Ireland (as Ryanair believe) or France (as French authorities believe).

Over 40 destinations served at one time or another

Since Ryanair opened its Marseille base in November 2006, the carrier will by the end of this year have operated flights to over 40 destinations at one time or another. New services to seven destinations (Düsseldorf Weeze, Palermo, Rome Ciampino, Seville, Tenerife South, Valencia and Venice Treviso) will begin at the beginning of November, of which four (Düsseldorf, Rome, Seville and Valencia) will continue after mid-January using aircraft based at these airports. The remaining three routes (Palermo, Tenerife South and Venice Treviso) will operate for just 11 weeks, so anyone wanting to travel these routes should book quickly.

The six other routes to survive well into 2011 are Brussels Charleroi, Fez, London Stansted, Madrid, Malta and Porto.

Along with the three yet-to-start routes mentioned previously the other routes to disappear are five domestic routes (to Brest, Lille, Nantes, Paris Beauvais and Tours) on which Air France competes directly on just two (Lille and Nantes), four routes to Morocco (Agadir, Marrakech, Nador and Tangier) and Eindhoven, one of Ryanair’s first routes from the airport back in November 2006.