Airline with the most new airports The  welcome to China (from Chicago) in May  and some other cakes and places: American has added a total of 18 new destinations, and dropped just one.

American Airlines has been the most adventurous US carrier during the last 12 months increasing the number of destinations it serves by 17. The airline has added a total of 18 new destinations, and dropped just one (Vail in Colordao). All of the new airports are served from either Chicago O’Hare, Dallas/Ft. Worth or Miami. The new airports served are summarised in the following table:

Runner-up in this category is Branson AirExpress, a new airline that only began operating this year from the new Branson Airport in Missouri. Flights are operated by ExpressJet and the carrier launched services from Branson to eight destinations, giving it nine airports in all.

Note: By combining the networks of Delta and Northwest, and also Frontier and Midwest, the two remaining brands (Delta and Frontier) are treated as single airlines. The biggest domestic airline in the US, Southwest, added just two new destinations in the last year; Milwaukee and Panama City Northwest Florida Beaches International. Aires of Colombia launched four routes to Fort Lauderdale in November last year and a service to New York JFK in June, making it the largest airline new to the US market.

This award goes to the airline with the most scheduled seats operating from US airports this October that was not operating in, or to, the US last October. Colombian carrier Aires serves Fort Lauderdale from four destinations in Colombia (Barranquilla, Bogota, Cali and Cartagena) plus New York JFK from Bogota. Bogota to Fort Lauderdale flights began last November while the New York JFK service began this summer on 25 June.

Runner-up in this category is Branson AirExpress with its network of routes from Branson, although many of these are seasonal. In fact, between mid-December and next Spring the airline will not operate any routes at all.

Notable new foreign carriers entering the US market for the first time in the last 12 months were Arik Air of Nigeria (linking Lagos with New York JFK) and Iceland Express (linking Keflavik with Newark and Orlando Sanford).

Apart from the demise of the Northwest and Midwest brands (don’t suppose Southwest will be next) the last year saw the disappearance in the US market of Flyglobespan (who collapsed last December) and CSA Czech Airlines, who withdrew from the Prague – New York market at the end of last October. The airline with the biggest net gain in the number of routes served is Southwest with 22 just beating United (21) and AirTran (19). As seen earlier American started operating to more new airports than any other carrier, and also started an impressive 49 new routes. However, it also axed 38 routes (including 25 from St. Louis) and so had a net gain of just 11. Southwest actually started 31 new routes, but dropped nine, while Allegiant also added 31 but dropped 19. United and AirTran both added 29 new routes but United dropped just eight (for a net gain of 21) while AirTran dropped 10, for a net gain of 19. Although Guam might not first come to mind when thinking of the US, Continental’s relaunched service between Guam and Hong Kong is one of four new routes out of Guam that contribute to the airline winning the Annie for the most new international routes.

Thanks to starting four new routes from the US territory of Guam (including double daily flights to Osaka Kansai) Continental wins the Annie for most new international routes started in the last 12 months. It also began three new international routes from Newark (to Athens, Munich and San Pedro Sulas in Honduras), one new route from Honolulu to Nadi (Fiji), and three routes from Houston Bush to Edmonton, Frankfurt and Tuxtla Gutierrez in Mexico.

American Airlines added 10 new international but dropped three (Boston to Aruba, Fort Lauderdale to San Jose in Costa Rica, and Chicago O’Hare to Puerto Vallarta in Mexico) for a net gain of seven, while AirTran started seven new international routes without dropping any.

Airline with the best cake 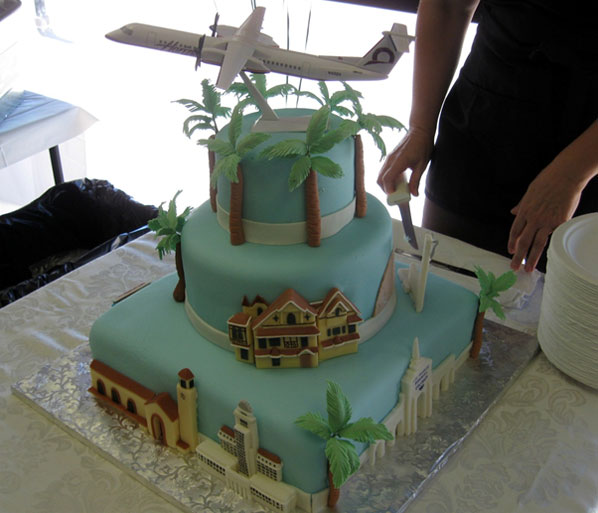 This three-tier cake was an anna.aero Cake of the Week in August. We love it. The bottom layer symbolises LA, while the middle tier shows San Jose landmarks. Why are cakes so important? Almost all the ones we get pictures of are made by airports and we think they are a significant indicator of the marketing efforts those airports plan to invest into a new service. After all, new routes need it. Take this new intra-California high-frequency route in the Silicon Valley. Horizon, an Alaska Air regional subsidiary, is competing its new 27 weekly Q400 flights with Southwest’s 64, American Eagle’s 41 and United Express’ 21. Worth baking a cake for you’d think.