Airport with the most new routes Nothing it seems is more likely to generate new routes than the promise of sunshine and the two leading airports when it came to the biggest net gain in destinations served this year were both in Florida. Orlando gained 14 new destinations, including daily services to Panama City North West Florida Beaches (Southwest), Grand Rapids in Michigan (Allegiant and AirTran), Lexington in Kentucky (Allegiant and AirTran again) and Huntsville in Alabama (AirTran). Miami came a close second with a net gain of 13 new destinations. It too, gained 14 new destinations, but lost its weekly Air Europa flight to Tenerife Norte in the Canary Islands.

Miami gained daily flights to eight new destinations; Birmingham in Alabama, Charleston in South Carolina, George Town in the Bahamas, Gainesville, Knoxville, Monterrey, Pensacola in Florida, and Phoenix. All of these are operated by American Airlines, with the exception of Monterrey that is served by AeroMexico.

Behind these two Floridian heavyweights came Chicago O’Hare with a net gain of 11 destinations, comprising 15 new destinations and the loss of four. Without Mexicana’s recent demise, and the corresponding loss of three destinations, the Illinois airport would have jointly won this award with Orlando.

Airport with the most new non-US routes A contributor to Miami’s win is Alitalia, which launched three weekly flights from Milan Malpensa at the beginning of June. The reborn Italian carrier joins Lufthansa in serving Miami with new European routes and a further five new international destinations have been added to Miami from within the Americas.

Airport with the most new carriers Last November: Virgin America's inaugural flights from Los Angeles and San Francisco to Fort Lauderdale-Hollywood. Believe it or not the blonde fella on top of the fire truck is the Knight of the Realm himself.

The winner of this award in the European Annies attracted a grand total of nine new carriers. In the US, Fort Lauderdale manages to win the award by attracting just three new airlines during the last 12 months. Colombian carrier Aires started flights to Bogota last November, the same month that Virgin America arrived with flights from both Los Angeles and San Francisco. German leisure carrier Condor started seasonal Frankfurt flights in May.

Branson (not Sir Richard) beats Melbourne (not in Australia) In the smallest airport category (for airports with passenger numbers between 100,000 and 500,000 in 2009) the winner was Branson in Missouri. This airport only opened in May 2009 and has seen capacity more than double in a year thanks to the creation of Branson AirExpress (an airline that surprisingly has nothing to do with serial airline founder Sir Richard Branson), whose flights are operated by ExpressJet. However, according to the airline’s website, four of its eight routes will cease operating at the end of October while the remaining four will continue until 12 December, with services scheduled to resume next Spring.

Runner-up in this size category is Melbourne (in Florida), which saw capacity jump over 80% thanks to the launch back in February of a new thrice-daily US Airways service to Charlotte complementing the airport’s existing four-times daily service to Atlanta with Delta. 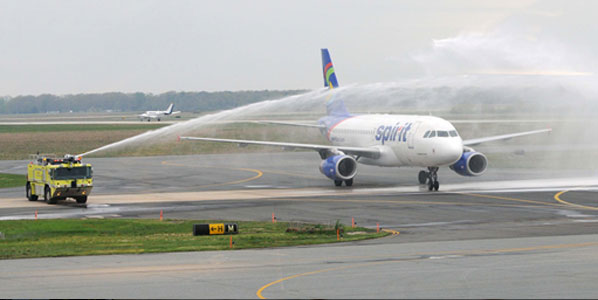 That’s the Spirit – in May, Atlantic City celebrated Spirit’s resumption of Detroit services, helping the airport towards its winning +50% capacity upswing.

In the next size category, Atlantic City has registered capacity growth of just over 50% despite adding just one new destination (Detroit, back in May) in the last year. However, local carrier Spirit Airlines has doubled frequency (and capacity) on several routes. Runner-up Asheville (in North Carolina) has seen capacity grow by 37% thanks to two new routes to Chicago O’Hare (with United) and Dallas/Ft. Worth (with American), while US Airways has added capacity on its major route to Charlotte.

Reno the way to success; Norfolk just misses out 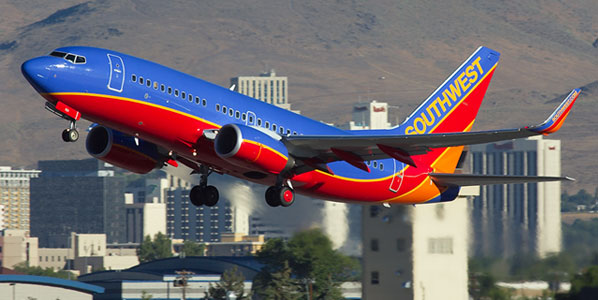 Southwest’s Reno-Denver takes off (and takes on United on the same route).

In the two-to-five million annual passenger airport section it was a close-run thing with Reno in Nevada (+12.1%) just edging Norfolk in Virginia (+11.9%). Reno welcomed new services to Denver (with Southwest taking on United), and Los Angeles (American joining Alaska Airlines, Southwest and United).

Norfolk in Virginia, which handled 3.4 million passengers last year lost its American service to St. Louis but gained Continental to Cleveland, Delta to Minneapolis/St. Paul and Southwest to Las Vegas, as well as Delta taking on US Airways on New York LaGuardia. This November American will take on Delta by offering an alternative non-stop service to New York JFK. Southwest Florida’s new Frontier service to Denver last November was essential to taking it well over double-digit growth. They didn’t get anna.aero Cake of the Week for the delicacy in this picture because we actually think it’s one of those pineapples with bits of cheese stuck in it.

In the five-to-ten 10 million annual passenger category, Fort Myers in Florida (+15.3%) just edged out Milwaukee in Wisconsin (+15.0%). Fort Myers (branded as Southwest Florida International Airport) joined Fort Lauderdale, Miami and Orlando as winners of a US Annie this week thanks to solid double-digit capacity growth aided by new routes to Chicago Midway (with AirTran), Denver (with Frontier), and Grand Rapids in Michigan (AirTran). Milwaukee has had a hectic year as home carrier Midwest was taken over by Republic and merged into Frontier while Southwest opened a base last November. AirTran has also been busy opening routes, but the airport still just missed out on first place. However, given the number of new routes announced to start before the end of the year, the airport may go one better next year.

Charlotte of growth in North Carolina May: Charlotte was much assisted in its leap to +15% by the US Airways hub which included this launch of a daily 288-seat A330-300 flight between Charlotte and Rome Fiumicino. US Airways continues to add both domestic and international routes at Charlotte – including Dublin and Madrid starting next May.

Finally, in the over 10 million annual passenger category, Charlotte (with 34.5 million passengers last year) sees capacity growth of almost 15% this October, beating a resurgent Detroit (+11.6%) into second place. US Airways continues to add routes in Charlotte (including two new European routes to Dublin and Madrid starting next May), while Detroit (with 31.3 million passengers last year) is benefiting from the launch of 10 new destinations with Delta (who have axed five destinations previously operated by Northwest). In addition, Spirit Airlines added daily flights to Atlantic City. May: Gary Kelly again – this time receiving another much-needed 737-800 for the opening of Northwest Florida Beaches International Airport (the bags read: “17 Hidden Beaches, 1 Revealing Destination.” The new facility replaced the existing Panama City – Bay County Airport in Panama, but it gave Southwest an excuse to serve the market with twice-daily flights from four of its main bases at Baltimore/Washington, Houston Hobby, Nashville and Orlando.

New airports do not get built that often these days, even in the US, so the biggest ‘new’ airport award goes to the (take a breath) Panama City Northwest Florida Beaches International Airport, which opened in May of this year and which is currently served by Delta (two destinations) and Southwest (four destinations).