Armenia gaining ever more links to western Europe thanks to Armavia; Aerosvit and flydubai new airlines for winter Yerevan’s old terminal, which was built in the 1960s for intra-Soviet flights, is next year going to be replaced by these brand new, colourful and modern facilities. This gives further room for growth at Zvartnots International Airport, which attracts both new foreign airlines and is home to the fast-expanding national carrier Armavia.

Roughly the size of Belgium and with a population of over 3.2 million, Armenia’s neighbours are Turkey (to the west), Georgia (north), Azerbaijan (east) and Iran (south). A former member of the Soviet Union, the country declared independence in August 1992. A national airline, privately owned Armavia, was formed in 1996. The capital Yerevan has a population of over one million people and is served by Zvartnots International Airport, which is where Armavia is based. 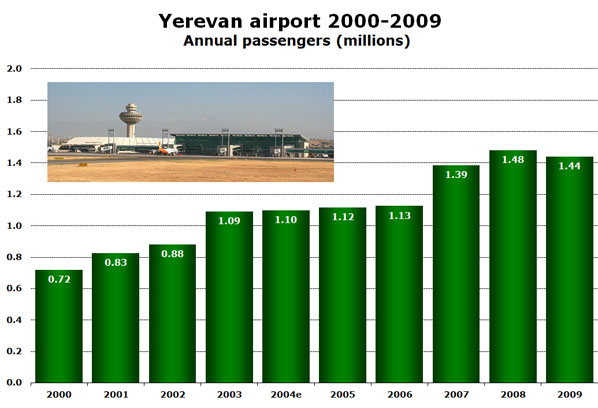 Passenger numbers are around 1.5 million with Armavia accounting for around 50%. Despite the airport reporting a small reduction in passenger numbers, Armavia saw its passenger numbers increase by almost 9% to just over 700,000, having grown by 13% in 2008 and 22% in 2007 (Source: ICAO). Load factors for the carrier have wavered between 60% and 70% for each of the last five years. 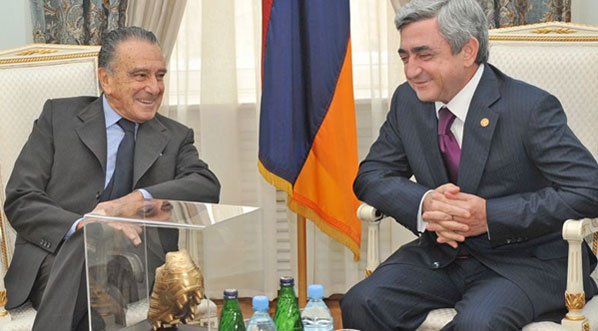 Eduardo Eurnekian, the Argentine billionaire of Armenian descent (whose Corporación América owns Yerevan’s Zvartnots airport – and the 33-airport Aeropuertos Argentina 2000 concession in Argentina) sits down with Armenia’s president Serzh Sarkisian. The head of state is reportedly anxious to see Zvartnots’ terminal construction work completed by a 2011 deadline. (We have no idea why there is golden football boot on the table.)

With a fleet comprising three A320s, four A319s and a CRJ, the airline currently operates over 100 weekly departures from the airport across a network of 34 destinations. The only routes served at least daily are Moscow Vnukovo (four daily flights), Tbilisi (twice daily) and Moscow’s two other airports at Domodedovo and Sheremetyevo, each of which are served daily. New routes started in the last two years include:

With the exception of Tbilisi in neighbouring Georgia, all of these new routes were started with just one or two weekly frequencies. The airline is on-track to be the launch customer for the new Sukhoi Superjet 100 some time later this year. The 96-seat aircraft fits between the CRJ and the A319 in terms of size and so may be ideally suited to starting other new routes.

Apart from Armavia, over 20 other airlines also operate scheduled services at the airport, led by Aeroflot, S7 Airlines and Czech Airlines. The only Western European carriers serving the airport at present are Air France (to Paris CDG), Austrian Airlines (to Vienna) and bmi British Midland (to London Heathrow). Lufthansa used to operate flights from its Munich hub but no longer has a presence at the airport. Other flag carriers operating at the airport include airBaltic, Belavia, LOT and Syrian Air.

Two new airlines starting flights to Armenia this winter are Aerosvit (to Kiev from 31 October, taking on both Armavia and Donbassaero) and flydubai (twice-weekly to Dubai from 21 November). The flydubai route is of particular interest as another regional LCC, Air Arabia, operated twice-weekly flights between Sharjah and Yerevan from late 2006 until the end of the winter 2008 season before terminating the route.

Among the sites worth seeing in Yerevan is the Karen Demirchyan Complex (below), a futuristic-looking sports and entertainment complex originally built in the early 80s and recently renovated at considerable expense. Other city landmarks include the Saint Gregory Cathedral (consecrated in 2001), the Presidential Palace and Republic Square.