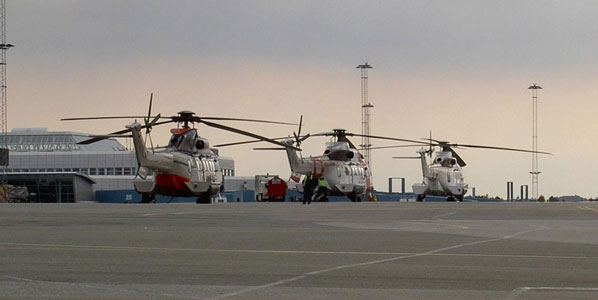 As the gateway to Norwegian North Sea oil and gas rigs, helicopter traffic makes up a considerable part of Bergen Airport’s movements and the airport’s old terminal now functions as a dedicated helicopter facility.

Bergen Airport, located on Norway’s south-west coast, is the country’s second busiest (after Oslo), handling 4.5 million terminal passengers in 2009. The city is recognised as the gateway to the fjords, and the airport also hosts many helicopter flights serving the North Sea oil and gas rigs. Aberdeen in Scotland, another city strongly associated with North Sea activities, is actually closer to Bergen than it is to London. 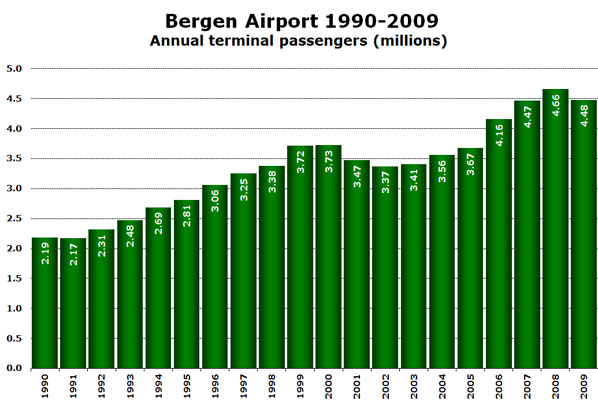 Passenger numbers grew by 70% between 1990 and 2000, but it would be a further six years before passengers numbers set a new record. With the majority of traffic passing through the airport travelling on business, the seasonality profile is relatively flat. The impact of the Icelandic volcano eruption back in April can clearly be seen. 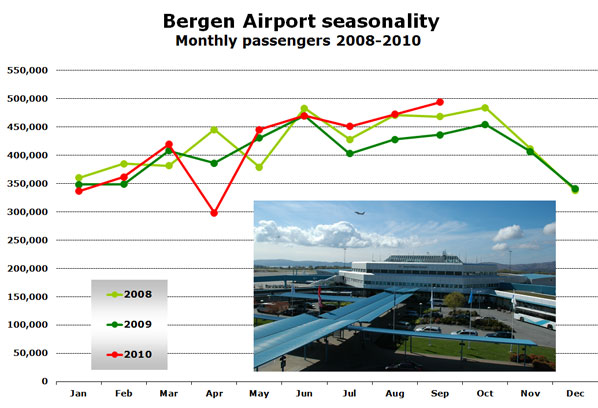 Local carriers dominate proceedings at the airport. SAS has over 40% of scheduled seat capacity while Norwegian now has over 35% with Widerøe a further 10%. The leading non-Scandinavian airline is KLM which operates four daily flights to Amsterdam, followed by airBaltic which serves both Riga and Stavanger.

Other carriers serving the airport include Cimber Sterling (to Billund with CRJs), City Airline (daily to Gothenburg with ERJs), Eastern Airways (to Newcastle), Lufthansa (double-daily to Frankfurt) and Wizz Air (twice weekly to Gdansk with A320s).

Norwegian launched six new international routes at the start of the summer season; the services to Antalya, Barcelona, Chania and Rome Fiumicino were each served with just one or two flights per week, while Copenhagen and Stockholm Arlanda were each served with six weekly flights. Apart from its year-round and summer seasonal routes, the low-cost carrier also operates some winter-only flights to Salzburg. Over the years a handful of destinations have been launched and subsequently abandoned. These include Hamburg, London Stansted (flights were moved to London Gatwick), Manchester and Paris Beauvais (flights were moved to Paris Orly).

Norwegian routes account for almost three-quarters of all flights and seats, followed by Denmark (mostly Copenhagen) and the United Kingdom. In all, 16 domestic destinations are served with Oslo (160 weekly departures, evenly split between SAS and Norwegian), beating Stavanger (107) and Trondheim (56). In 2009 just over 1.5 million passengers flew between Bergen and Oslo, accounting for one in every three passengers at the airport.