As Sun Country Airlines launched its London route in June, the airline held a competition in the famous Mall of America where three lucky winners were driven straight off to the airport to fly across the Atlantic for the weekend.

The origins of St. Paul, Minnesota-based Sun Country Airlines can be traced back to the early 1980s when a group of former Braniff staff joined together to create the charter airline. Scheduled services did not begin until 1999, but these created extra costs for the airline and after the events of ‘9/11’ the airline folded in December 2001. A group of investors revived the airline and it began flying once more in early 2002. Passenger numbers at the airline’s home airport of Minneapolis / St. Paul (MSP) grew quickly from quarter of a million in 2002 to 1.5 million in 2007. 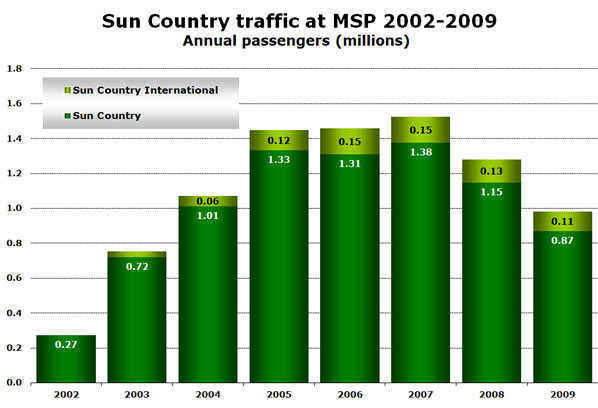 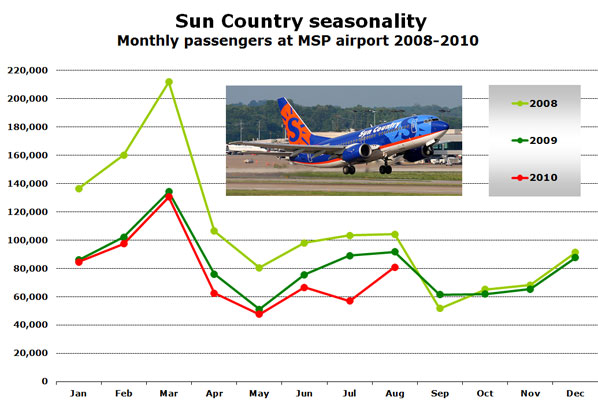 Demand peaks in March when the airline carries almost 40% more passengers than in any other month, primarily serving the legendary US ‘spring break’ leisure market. With a focus on the leisure market, the key destinations for the airline are California (and nearby Las Vegas), Florida, Mexico and the Caribbean. 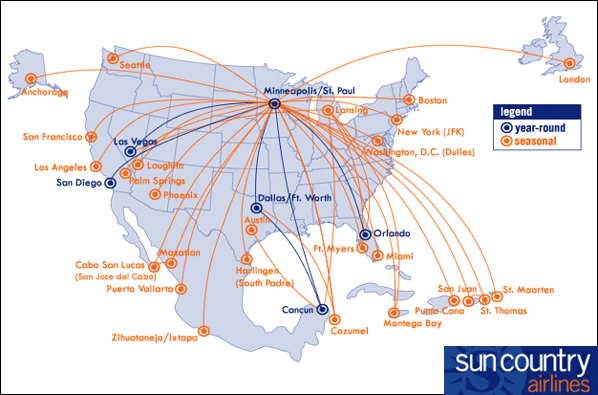 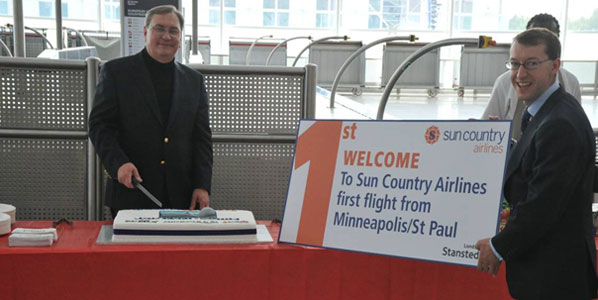 Stan Gadek, president and CEO of Sun Country Airlines, travelled on his airline’s first transatlantic service to cut the welcoming cake that was presented to him by Mark Souter, London Stansted’s Head of Airline Relations. The seasonal service, which lasted two months, is the result of spare capacity outside the airline’s strong winter sun network focus.

This summer, the airline raised its international profile by operating a weekly service to London Stansted between mid-June and mid-August using a 737-800. This operation required a re-fuelling stop in Gander. The airline’s fleet comprises nine 737-800s and three 737-700s. However, the fleet is adjusted seasonally as a result of an arrangement with Dutch carrier Transavia. During its slow summer season, Sun Country occasionally leases planes to Transavia, and during Transavia’s slow winter season, the airline leases planes to Sun Country (May to November are slow months for Sun Country and peak months for Transavia).

Lansing to become mini-base this December 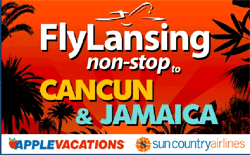 In late June, the airline announced that Lansing (in Michigan) would become a mini-base with the launch of five routes to Cancun (Mexico), Fort Myers (Florida), Las Vegas (Nevada), Montego Bay (Jamaica) and Orlando (Florida) starting in mid-December and operating until the end of April. Cancun and Fort Myers will each be served with four weekly flights while Las Vegas and Orlando will be served twice weekly. Flights to Montego Bay will operate just once per week.

Robert Selig, executive director of Lansing’s Capital Region International Airport, welcomed Sun Country to the market saying; “We are thrilled to partner with Sun Country Airlines and Apple Vacations to expand our international program and introduce new domestic destinations. Our travellers will now enjoy non-stops flights to five new exciting destinations and we are confident that the new service will be very popular with Michigan travellers.”