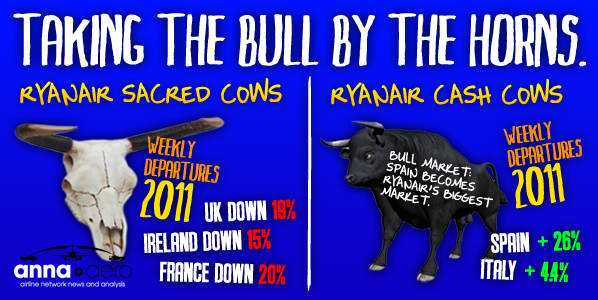 Last week’s announcement by Ryanair that it would stop basing aircraft (and crews) in Marseille from next January (and thus axe 13 routes) is just another example of the airline’s approach to network development. There are no sacred cows. Routes, bases and whole country markets will be closed if the airline perceives that there are better opportunities for profit elsewhere.

This week, anna.aero takes a close look at how the airline has shifted around capacity for this winter compared with last winter. Comparing the first week of February for 2011 with 2010 reveals that overall capacity is not that different, though this may yet change as Ryanair considers what it will do with the aircraft it has removed from Marseille. However, one thing is clear. While overall capacity may not be up significantly, there have been major changes for some individual country markets, with the big news being that Spain (with significant growth) has now overtaken the UK (where capacity has been cut once again this winter) to become Ryanair’s number one market. 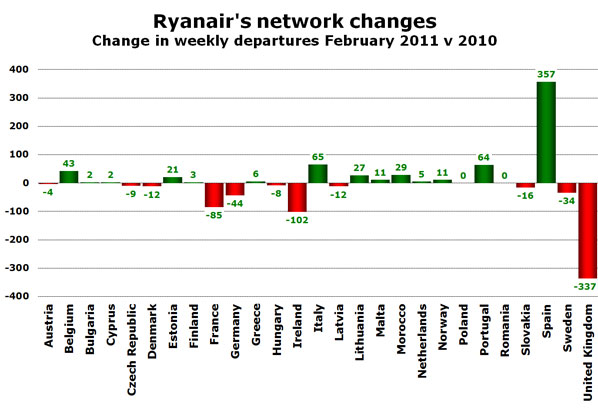 France and UK both down 20%; Spain up more than a quarter

Apart from the UK, other countries to lose out year-on-year are France and Ireland, while Belgium, Italy and Portugal each show a significant increase. Looking at the seven leading country markets in more detail shows that in percentage terms, France and the UK are both down 20%, Ireland is down almost 15%, while Spain is up a staggering 26% thanks to new (or revived) bases in Barcelona, Seville and Valencia.

While the total number of flights may be relatively similar next February, the number of airports has increased from 137 to 144 and the number of routes operated has increased by more than 12% from 721 to 810. As a result, the average weekly frequency of winter routes has fallen from 5.4 per week to 4.8 per week.

Hungary will have disappeared as a country market by then as the airline ends its Budapest operations, joining Switzerland which last saw Ryanair flights in December 2009 when the carrier’s routes to Basel ended. However, four new countries have been added; Bulgaria (Plovdiv), Cyprus (Larnaca), Estonia (Tallinn) and Greece (Kos and Rhodes).

A closer look reveals that although Ryanair will serve seven more airports in February 2011 than February 2010, this hides the fact that six airports have been dropped while 13 have been added to the network.

Among the “lost” airports, Friedrichshafen services have been moved to Memmingen, and Verona Brescia routes have been moved to Verona. Although Figari has disappeared as a winter destination, it will continue to be served next summer. Four of the 12 “new” airports are in Spain and include Fuerteventura, which Ryanair has previously served. Verona is also an airport that Ryanair is returning to.

As Ryanair continues to tweak its winter schedule, anna.aero will be keeping a close eye on developments. Given the airline’s recent indication that it is more willing to consider using larger airports in the future to tap into bigger demand, future route announcements will be studied with great interest.