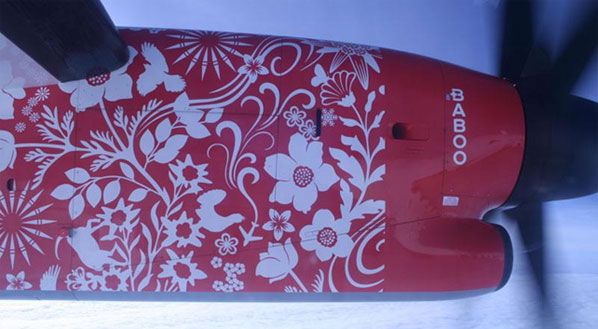 Expect to see more of this view when you look out of the window on a Baboo flight – the E-Jets are going back as the airline concentrates on two Q400s and eight ex-Geneva routes this winter. Quite where Baboo goes from here is unclear, as four routes (and three-quarters of these flights) compete head-on with easyJet, which also has a frequency advantage on three of the routes...

Geneva-based regional airline Baboo has announced plans to end services to Athens and London City in early November. This coincides with the airline’s decision to stop operating its three Embraer E190s and to focus on its two remaining Q400s. Analysis of the airline’s online timetable tool reveals that it plans to operate eight routes from Geneva this winter with its own aircraft. These are:

This network generates 41 weekly departures, with most (eight) on a Monday. With relatively short sector lengths, the airline is able to operate up to four rotations per day and thus service these flights with just two aircraft. In addition, Baboo is also offering three daily flights to Lugano, but these are operated by codeshare partner Darwin Airline’s Saab 340.

During the summer, the airline operated seasonal routes to Biarritz, Figari, Ibiza, Larnaca and St Tropez, while last winter saw the airline serve Oxford as a winter ski route. Routes to Marseille and Milan Malpensa ended back in April.

Quite where the airline goes from here is unclear given that on four routes (and three-quarters of its flights) it competes head-on with easyJet, which also has a frequency advantage on three of the routes.