New-look Aerolíneas Argentinas to join SkyTeam in 2012; routes to Barcelona and Madrid represent 23% of ASKs

It was announced last week that Argentina’s flag-carrier Aerolíneas Argentinas has been invited to join the SkyTeam alliance, with full integration likely to occur in 2012. This marks something of a turnaround in the carrier’s fortunes. Back in 2001 after ‘9/11’, the airline’s future looked in severe doubt before Grupo Marsans came to the rescue. Then in 2008, the airline was sold back to the government. In June this year, after almost two years in government hands, the airline unveiled a new corporate identity, using a shade of blue closer to that used in the national flag, but retaining the stylised Condor. 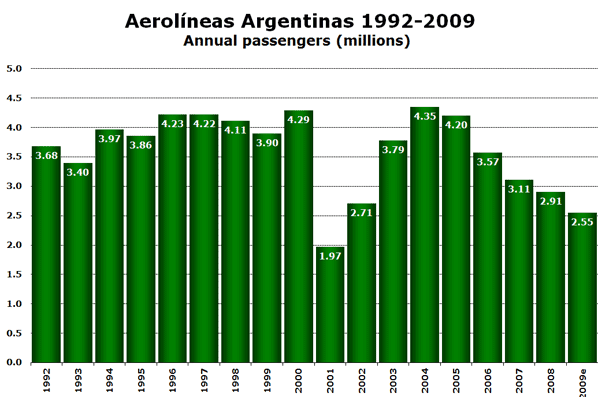 Along with its domestic subsidiary Austral (not to be confused with Air Austral), Aerolíneas Argentinas operates over 40 domestic routes, including 30 from Buenos Aires’ ‘downtown’ airport AEP (Aeropargue Jorge Newvbery). The highest frequency services are to Cordoba (served six times daily) and Mendoza (served five times daily), however, eight other domestic routes are also served with at least three daily flights. The national carrier has around a 70% share of the local market with its only major rival LAN having over 25% from a network of 13 domestic routes.

In June, the government-owned airline unveiled a new corporate identity using a shade of blue closer to the national flag. In 2012, Aerolíneas Argentinas is expected to become a fully integrated member of the SkyTeam alliance.

Serves 13 countries including Australia, Italy, New Zealand, Spain and US

The airline flies to 13 other countries including eight within South America (Bolivia, Brazil, Chile, Colombia, Paraguay, Peru, Uruguay and Venezuela). Auckland in New Zealand is served non-stop with an onward connection to Sydney, while the only US destination served at present is Miami (daily). To Europe, there are direct flights from Buenos Aires to Barcelona, Madrid and Rome. As a result, in terms of ASKs (available seat-kilometres), European services make up over 30% of the airline’s traffic.

The only new route to have been launched in 2010 was to Salvador de Bahia in Brazil, a low frequency destination (one to two flights per week) that began back in January. Plans to resume flights to Mexico City this winter have recently been postponed. However, most of the airline’s flights to Brazil, Chile and Uruguay were re-located from Buenos Aires’ main international airport (EZE) to the more downtown Jorge Newbery (AEP) airport in the middle of March.

On international routes to and from Argentina, the carrier accounts for less than 25% of the market, a worryingly low share for a national airline and possibly a reflection of its past difficulties.

Along with its subsidiary Austral, Aerolíneas Argentinas currently operates a fleet of over 60 aircraft, including several long-haul A340s and 747s that are used on flights to Europe, Australasia and North America. Austral, which has been operating a fleet of ageing MD-80s, recently took delivery of its first Embraer E190s. It will receive a total of 20 of the type in the coming months, replacing the MD-80s that will be phased out.