Ranked 13th in Germany, Leipzig/Halle’s international network is dominated by Antalya and Palma 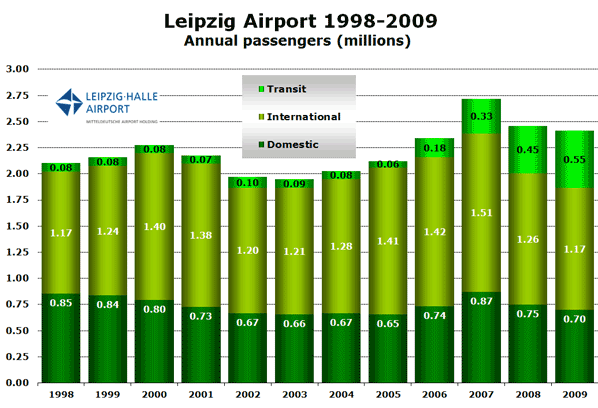 The domestic market is well served, with Lufthansa operating to its two main hubs at Frankfurt and Munich with multiple daily flights, as well as to its Düsseldorf hub. Its low-cost subsidiary germanwings flies twice-daily to Cologne/Bonn and daily to Stuttgart. There are no flights to Berlin as the German capital is less than 150 kilometres away and served with good rail links.

According to the airport, this summer saw the airport handle up to 259 weekly flights to 54 airports in 18 countries, operated by 27 airlines. However, analysis of the airport’s passenger numbers reveals that just two destinations, Antalya in Turkey and Palma de Mallorca in Spain, accounted for around 40% of all international passengers last year. Among the top 12 international routes last year, only two (Paris and Vienna, highlighted below in pale green) were not ‘summer-sun’ destinations. 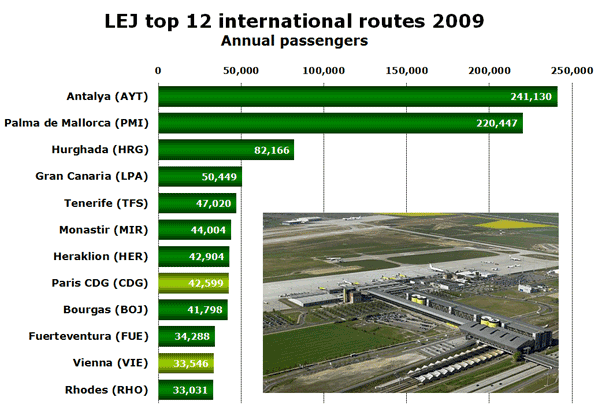 Apart from Paris (served by Air France) and Vienna (served by Austrian), the only other major European city served by direct services is Brussels. In June of this year, the German regional carrier OLT began operating to the Belgian capital with three weekly flights using a Swearingen Metro. Somewhat surprisingly, there are currently no scheduled services to either the UK or Italy.