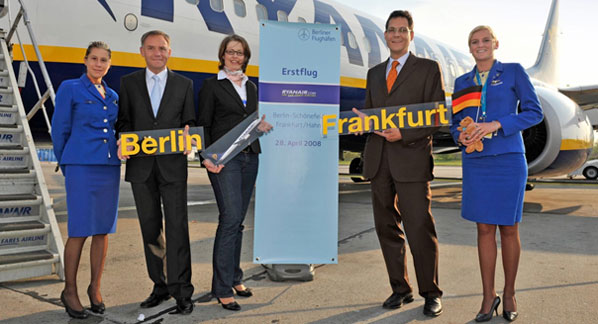 The first route Ryanair will drop from its Frankfurt Hahn base is the domestic service to Berlin Schönefeld, which barely lasts two weeks into the new (tax) year. At the start of the summer season, a further eight routes get cut and 15 have frequencies reduced.

Hot on the heels of our recent analysis of how Ryanair is shifting capacity between country markets comes the news that the carrier is responding to the German government’s introduction of an air travel tax in 2011 by reducing its based aircraft at Frankfurt Hahn from 11 to 8 and axing around 30% of flights next summer. From a route network perspective, a total of nine routes (out of 54) are being dropped; Agadir, Berlin, Gdansk, Gothenburg, Klagenfurt, Prague, Santiago de Compostela, Seville and Wroclaw. In addition, a further 15 routes will see frequency reductions.

Since opening a base at Frankfurt Hahn in February 2002, Ryanair has, at one time or other, served almost 80 destinations from the airport. This summer’s network comprised 54 routes, including several that started for the first time. These new routes were to Agadir, Fuerteventura, Ibiza, Kos, Lleida, Pula and Volos. Proving how dynamic the carrier’s network is, routes to Birmingham, Bratislava, Carcassonne, Glasgow Prestwick, Hamburg Lübeck and Manchester were dropped between summer 2009 and summer 2010.
Between summer 2007 and summer 2010, Ryanair has not increased the number of flights it operates at the airport. However, the number of destinations served has risen from 40 to 54 as a result of which the average weekly frequency on each route has fallen from 7.5 flights per week to just 5.1.
Even before this latest announcement, passenger numbers at Hahn in the first nine months of 2010 were down 9.1%, while German airports as a whole saw growth of 4.2%.