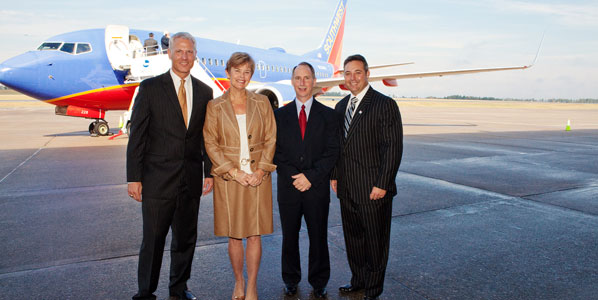 Despite carrying more US domestic passengers than any other airline, Southwest only operates from 69 airports. Earlier this year, it announced that it would add not one but two new airports, both in South Carolina, from spring 2011. Now it has released details of the destinations it will serve from Charleston (CHS) and Greenville/Spartanburg (GSP), and the frequency of service. Flights will begin on 13 March 2011 with both airports having seven daily flights. The number of weekly departures on each route is summarised below.

Both airports are well-served by the major legacy carriers, which mostly operate regional jets into their main east coast hubs. Destinations and weekly departures are summarised in the table below.

At Greenville/Spartanburg, some low-cost flights are offered by Allegiant Air, which currently operates twice-weekly to Fort Lauderdale and Punta Gorda, three-times weekly to St Petersburg/Clearwater, and four times weekly to Orlando. All four of these destinations are in Florida. Interestingly, Allegiant is moving its Orlando flights to Orlando Sanford next February.