Imagine it’s Monday and you’re a European business executive who’s just been told you have to make a day return trip on Friday on one of your country’s busiest domestic air routes. What are your options and how much will it cost? Well, this week anna.aero imagined that for someone in France, Germany, Italy, Norway, Spain, Sweden and the UK. For each of these countries, we took a major domestic route and imagined that we wanted to make a day return trip departing at around 08:00 and heading home from the destination airport at around 17:00. We assumed that our executive would be travelling light, with no bag to check-in, but that he/she was cost-conscious enough to choose the cheapest available service option with each carrier (so no Speedy/Priority Boarding, Business Class or any other upgrades).

With the various airport permutations available on each route, these seven city-pairs generated a total of 30 airport-pair-airline combinations. Fare data was collected on Monday in the local currency and then converted to Euros using xe.com rates to enable comparisons across Europe to be made. The ranked fare data across these 30 routes is shown below. 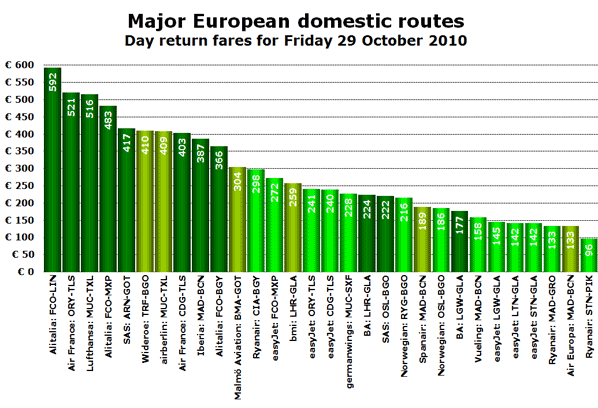 Flights on low-cost carriers are shown in bright green, those on legacy/flag carriers in dark green and the rest in pale green. Return fares (including all taxes) range from slightly less than €100 to just under €600, with Ryanair and Alitalia being at opposite ends of the scale. As might be expected, LCCs are on the whole much cheaper than legacy carriers, with no LCC fare being above €300, while only three of the 11 legacy airline route fares were below €300.

What about the same routes in mid-February?

If booking at such relatively short notice is inevitably going to result in high fares, what happens if we repeat the exercise for a Wednesday in February? Over half of the airline routes can now be booked for under €100, while all, bar one, can be booked for under €300. 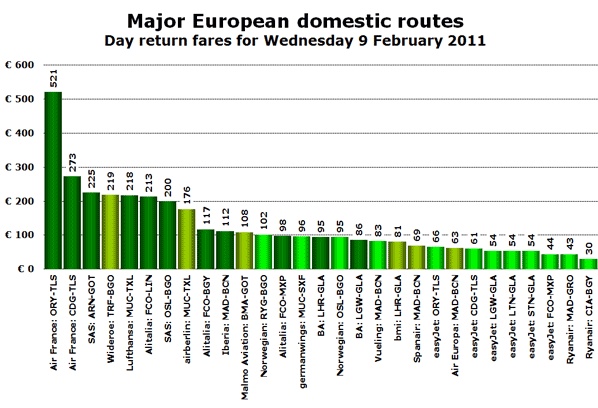 Air France’s fares between Paris Orly and Toulouse remain stubbornly high even when booked over three months in advance. The cheapest seven routes are all operated either by easyJet or Ryanair, while Air France has the two most expensive fares.

London – Glasgow has most competition

Looking at the individual country markets, our executive has most choice travelling between London and Glasgow. With four London airports and two Glasgow airports to choose from, there are a total of seven different service options. 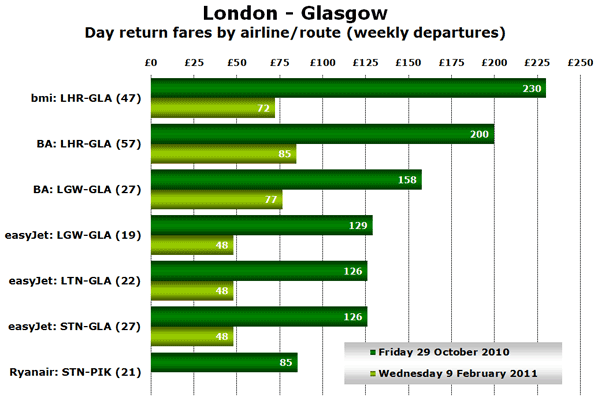 Although British Airways and bmi are unable to beat easyJet and Ryanair on price, their fares are not as high as might be expected and the fares do include a number of service features as standard, such as assigned seating and some in-flight catering. It was impossible to collect Ryanair fare data for next February on the London Stansted to Glasgow Prestwick route as the service frequency at that time drops down to a single daily flight according to the airline’s online booking tool.

Until the introduction of the high-speed rail link between Madrid and Barcelona this route used to see almost five million annual passenger journeys between the two cities. However, even now, the route still carries over three million passengers and sees five carriers competing for traffic. As a result, four of the five airlines offer fares that are not that far apart, the notable exception being Iberia. 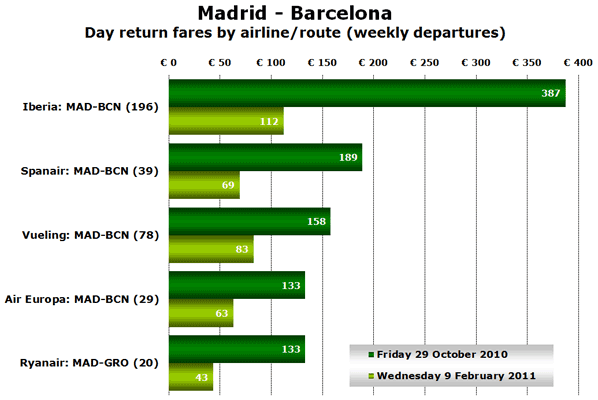 In Germany, the airlines follow the expected rankings with germanwings being cheapest followed by airberlin and then Lufthansa. In France, easyJet is much cheaper than Air France, especially for bookings in February, while in Italy, Ryanair and easyJet are cheaper than Alitalia, although not by as much as might be expected.

Only a small sample

It should be acknowledged that this data was collected manually in a single afternoon for just 30 routes connecting just seven city-pairs in Europe, on only two selected days. As such, it is a very small sample of fare data for domestic operations in Europe. Fortunately, the results are pretty much what would be expected given an understanding of the business models of the various airlines involved.