Tiger arrived in Brisbane in March. Now, will Tiger’s entry onto Australia’s second busiest route stimulate growth? There’s already lots of competition (Qantas, Virgin Blue, JetStar) but only 3% growth since 2001, compared to over 20% for Sydney-Melbourne.

Tiger Airways announced this week that it intends to start flying between Brisbane and Sydney starting on 7 February 2011. The route is the second busiest in Australia with over four million passengers in 2009. Initially, the service will be operated twice daily. Competition comes from Qantas (over 140 weekly departures), Virgin Blue (over 120 weekly departures) and Jetstar (21 weekly departures). 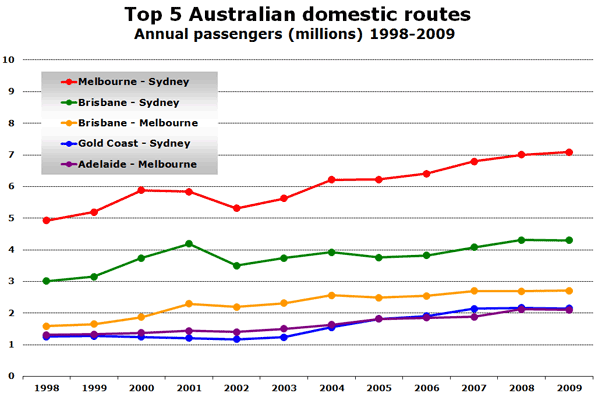 Tiger Airways Australia’s Managing Director, Crawford Rix, says: “Recently we announced our 10th aircraft for Australia arriving before the end of 2010 and just last week, we announced another two aircraft for Australia, bringing the total number of A320 aircraft to 12 by early 2011. Next month we celebrate two more significant milestones including the commencement of flights from our new base at Melbourne (Avalon Airport) as well as our third year in operation. Because of Tiger Airways, air travel has never been more affordable. We’ve brought real competition to the market and real choice for the consumer. It’s great that more and more people can join in the Low Fare Revolution as Tiger Airways continues to extend its paw print across the nation.”

The CEO of Sydney Airport, Russell Balding, also congratulated Tiger Airways on the new services and the extra choice they will provide for passengers. “The Sydney-Brisbane route is one of the busiest in Australia so passengers will benefit from the additional choice that Tiger Airways provides,” Balding said.